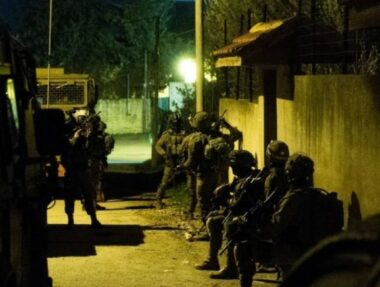 The PPS said the soldiers stormed and ransacked many homes across the West Bank, causing damage, and interrogated many Palestinians.

It added that the army also installed many roadblocks before stopping and searching dozens of cars, and interrogated scores of residents while inspecting their ID cards.

It is worth mentioning that the soldiers also shot five young men with live rounds in the chest, arms, and lower extremities, in addition to a young woman, identified as Aya Ghazi as-Souqi, who was also shot in the left leg while in her home, when the army invaded Jenin, in northern West Bank, and attacked protesters.

The Israeli army said Palestinian fighters exchanged fire with the soldiers during the invasion into Jenin, and Jenin refugee camp.

In related news, the soldiers demolished five structures in Hares village, west of the central West Bank city of Salfit.

The soldiers also confiscated a mobile home east of Yatta town, south of the southern West Bank city of Hebron.

In addition, Israeli colonialist settlers attacked a home in Burin village, south of the northern West Bank city of Nablus, and cut at least twenty olive trees in its yard.