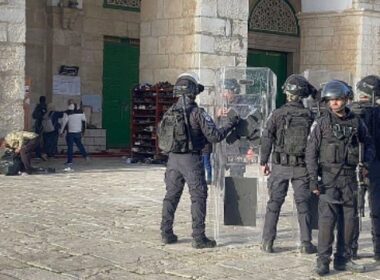 On Friday, Israeli soldiers abducted three Palestinians, including a young woman and a child, in occupied Jerusalem, in the West Bank.

Eyewitnesses said the soldiers stopped a young woman while walking in the Bab al-Amoud area and abducted her before moving her to an interrogation facility.

The young woman was trying to reach the Al-Aqsa Mosque when the soldiers stopped her.

The soldiers also abducted a child while walking near Bab Huta, one of the gates leading to Al-Aqsa.

In addition, the soldiers assaulted and injured a young man near Bab al-Majles, before abducting him.

Earlier Friday, the soldiers injured dozens of Palestinians, including a journalist, and attacked medics in the courtyards of the Al-Aqsa Mosque.