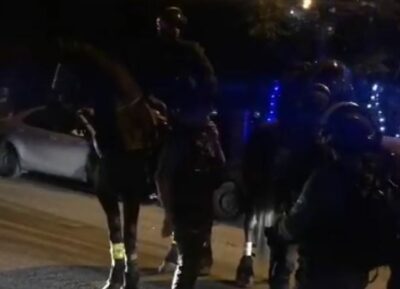 Eyewitnesses said the soldiers and police officers invaded the neighborhood and attacked dozens of residents who are nonviolently protesting the illegal Israeli takeover of Palestinian homes in Sheikh Jarrah.

They added that the soldiers were trying to break into homes but were stopped and encountered by the solidarity activist who managed to repel the invasion.

The Israeli police then deployed mounted police officers in attacking the Palestinians, in addition to spraying them with wastewater mixed with chemicals.

The police also fired many concussion grenades and gas bombs around the homes Israel is trying to take from the Palestinians to replace them with illegal colonialist settlers.

In addition, the soldiers attacked two young men, and pushed them onto the ground before cuffing them, and took them to a nearby police station.