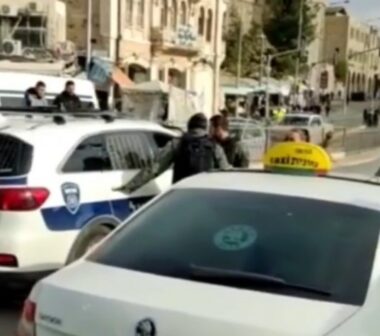 Israeli soldiers assaulted, Wednesday, a young Palestinian man near Bab al-Amoud, one of the gates leading to the Al-Aqsa Mosque in occupied Jerusalem, before abducting him.

Eyewitnesses said the soldiers stopped the young man near Bab al-Amoud and repeatedly assaulted him.

The young man, who remained unidentified at the time of this report, was taken by the soldiers to an interrogation facility in Jerusalem.

In related news, the soldiers invaded the main entrance of the al-Arroub refugee camp, north of the southern West Bank city of Hebron, leading to protests before the army fired gas bombs and concussion grenades.

Furthermore, the soldiers abducted ten Palestinians, including a father and his two sons in addition to one child, from their homes in several parts of the Hebron governorate.

In addition, the soldiers abducted five young men in Jerusalem and Ramallah, in the occupied West Bank.

The soldiers also invaded ‘Aida refugee camp, south of Bethlehem, and Husan town, west of the city, before shooting one Palestinian and abducting three others.