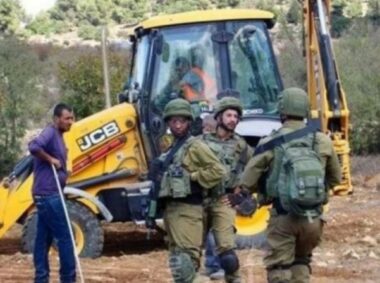 A few days after illegal Israeli colonizers supported 120 olive saplings, Israeli soldiers confiscated a bulldozer and assaulted Municipality and Agriculture Ministry workers while rehabilitating a Palestinian land in Kafr Ra’ey town, south of Jenin, in the northern part of the occupied West Bank.

Majed Sheikh Ibrahim, a mayor of Kafr Ra’ey, said the soldiers invaded lands in the village and confiscated a bulldozer after assaulting and detaining its driver in addition to Municipality and Agriculture Ministry workers.

He added that the Palestinians were rehabilitating farmlands and preparing to pave an agricultural road near the illegal Mevo Dothan and Harmesh colonies built on stolen Palestinian lands.

The Palestinian lands in the area and the farmers are subject to frequent Israeli violations.

On Saturday, the colonizers cut and uprooted eighty Palestinian olive trees in Yasuf village, east of Salfit in the central West Bank.