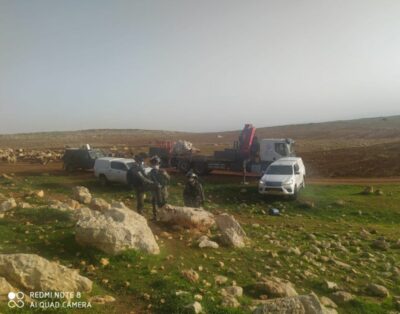 Israeli soldiers invaded, Tuesday, the al-Qaboun area, east of the al-al-Mughayyir   village, northeast of the central West Bank city of Ramallah, before demolishing a barn and confiscating a tent.

Ami Abu Alia, the head of al- Mughayyir Village Council, said the soldiers surrounded the area before invading it, confiscated a tent and demolished a barn, owned by Hasan Abu al-Kbash.

He added that the village has been subject to escalating invasions and violations, including those carried out by fanatic illegal Israeli colonists, especially in Ein Samia and Marj ath-Thahab areas.

On December 4th, the soldiers shot and killed a child, identified as Ali Ayman Abu Alia, 14, while participating in a peaceful march in his village of al-Mughayyir.

On Tuesday at dawn, the soldiers abducted ten Palestinians from their homes, in several parts of the occupied West Bank, after the army stormed and ransacked many houses and buildings, wounding one woman.