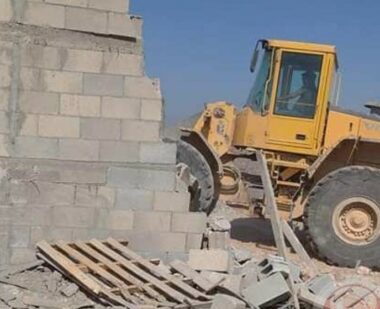 Israeli soldiers demolished, on Tuesday morning, a Palestinian home in Yitma village, south of Nablus, in the northern part of the occupied West Bank.

Ghassan Daghlas, a Palestinian official who monitors Israel’s illegal colonialist activities in northern West Bank, said the soldiers demolished the under-construction home on Bara’ Ismael Najjar, in the northeastern part of the village.

Daghlas added that the army issued the demolition order against the property only a week ago, under the pretext of being built without a permit from the so-called “Civil Administration Office,” run by the illegal Israeli occupation.

It is worth mentioning that, fifteen years ago, the army demolished Bara’s home under the same allegations.