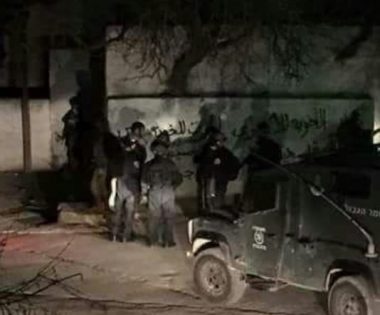 Israeli soldiers invaded, on Friday at dawn, Palestinian homes in Hebron, in the southern part of the occupied West Bank, and fractured the arm of a woman who tried to prevent them from abducting her son.

Media sources in Hebron said the soldiers invaded the home of Bassam Abu Aisha in Jabal Abu Rumman area, in Hebron city, violently searched the property causing excessive damage, and assaulted his wife who tried to prevent them from abducting her son, Sa’ed, 27.

The sources added that the woman suffered fractures in one of her arms, in addition to causing various cuts and bruises, before abducting her son.

Besides causing excessive damage to the family’s home, the soldiers also confiscated cash from the property.

In addition, the soldiers invaded the home of Ayed Doudin, a political leader of Hamas in the al-Alqa village, in Doura town near Hebron, just hours after releasing him from prison after he was held for 18 months under arbitrary Administrative Detention orders without charges of trial.

The soldiers also invaded Beit ‘Awwa town, southwest of Hebron, and searched many homes, including the home of a political prisoner, identified as Nabil al-Masalma.

In related news, the soldiers invaded the Tarbeeqa area in Beit Ummar town, north of Hebron, and violently searched the home of Hilmi Abu Ayyash, before summoning him for interrogation in Etzion military base.

Prior to withdrawing from Beit Ummar, the soldiers fired gas bombs and concussion grenades at local youngsters who hurled stones at the invading jeeps; many Palestinians suffered the effects of teargas inhalation.