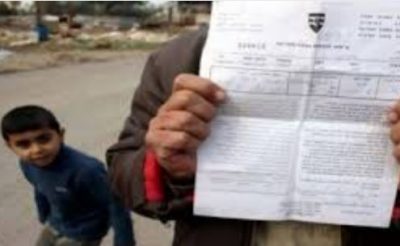 Hannoun Fannoun, a member of Nahhalin Town Council, said the five homes ae located in Sabeeha al-Foqa and Wad an-No’man areas, and added that the military claims the properties were not licensed by the Israeli Civil Administration office, in the occupied West Bank.

Fannoun added that the town has been subject to serious Israeli violations and escalation, including the illegal confiscation of privately-owned lands, demolitions of homes and property, and orders to halt constructions, in addition to ongoing invasions, violent searches of homes and abductions.

The official also said that Israel is preventing the Palestinians from building on their own lands, and is illegally confiscating and isolating their lands by surrounding them with the illegal Annexation Wall and colonies.

In related news, the army issued orders for uprooting grapevines and olive trees in Khallet Thaher al-Ein area, in al-Khader town, south of Bethlehem, to pave a new road for colonialist settlers.

The order refers to large areas of the Palestinians land which were illegally confiscated by the Israeli military months earlier.