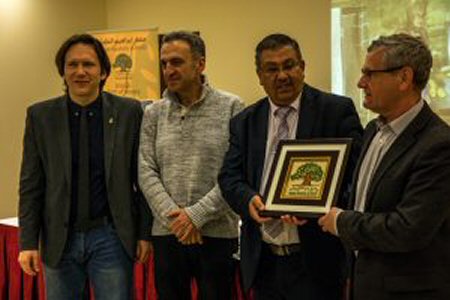 An agreement signed between Masar Ibrahim al Khalil and representatives from seven European countries, on Monday night, marks a significant step forward for Palestinian tourism, says the Mayor of Bethlehem.

The agreement between the Union of European Cultural Trails operating the pan-European St. James track and Masar Ibrahim, seeks to expand cooperation and cross-culture engagement between the two organisations.

Mayor Anton Salman praised this agreement saying that this is a very promising step contributing to activating a new type of tourism that sheds the light on culture, history and nature in order to develop and increase tourism.

‘Following this agreement we would be able to promote tourism in terms of cultural and historical aspects beyond the religious framework in which we confined ourselves,’ Mayor Salman said in an interview with PNN.

The Deputy Minister of Tourism, Ali Abu Sorour, praised the agreement as being in line with the work of the ministry to diversify the tourism sector and to promote organizations that focus on the environment, culture, and the history of Palestine.

‘We focus on supporting trails with political, economic, and educational basis,’ Sorour said in an interview with PNN. ‘Trails are newly included in the work of the Palestinian tourism and we are eager to gain experience from the countries that preceded us in this field. I think that the EU countries have good experience and we will learn from them.

Board Chairman for Masar Ibrahim, Raed Saada, lauded the deal as important for the long term development of tourism in Palestine.

‘We have worked with many countries through our specialization in the community tourism,’ said Saada, ‘and these kinds of agreements are beneficial for us not only for now, but also on the long term and we hope that tourism in Palestine will develop.’

‘Our presence on the global route map is a positive opportunity for Palestine to get rid of the negative image reflected by the Western media about Palestine,’ he added.

Simone Pettirossi, who attended the conference on behalf of the European council, shared the views of his Palestinian counterparts in reinstating the opportunities presented by the deal.

‘We come to Palestine with a very big delegation from a lot of European countries…’ Pettirossi said. ‘I am very happy to stay here, to know a lot of things about Bethlehem that I didn’t know.’

Pettirossi added that this agreement is an agreement to exchange experience.

Currently, Masar Ibrahim is operating its 21-day event (Thruhike) which gives hikers the opportunity to cross more than 55 communities in Palestine following the footsteps of Abraham.

The St James path is a pan-European path across Spain and Eastern Europe also known as the Camino de Santiago.

The path follows the steps of the Christian St James and is commonly served by Christian pilgrims and environmental and histological enthusiasts.

Sections of the path in Northern Spain and France are protected by the United Nations Educational, Scientific and Cultural Organization (UNESCO).