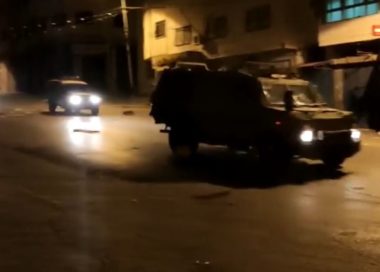 Israeli soldiers injured, on Wednesday at dawn, at least twenty-six Palestinians in the northern West Bank city of Nablus, after the army accompanied dozens of colonialist settlers into Joseph’s Tomb, east of the city.

Media sources said the soldiers invaded Joseph’s Tomb area, and resorted to the excessive use of force against Palestinian youngsters, protesting the invasion.

It is worth mentioning that an armored bulldozer accompanied the invading soldiers while a military drone hovered overhead.

Joseph the Patriarch is revered by Jews, Muslims, Christians, and Samaritans alike. The Israeli military allows Jews to visit as part of organized pilgrimages, despite the site being located in Area A where the PA has full control, and prohibits locals from worshiping at the site.

Palestinians believe that Joseph’s Tomb is the funerary monument to Sheikh Yousif Dweikat, a local religious and social figure; however, the Palestinians are denied access to the site.

On Tuesday at night, illegal colonists hurled stones and empty bottles on Palestinian cars driving on the Jenin-Nablus road, in additional to verbally and physically assaulting several Palestinians walking in that area, while Israeli soldiers stood and watched without attempting to intervene.