Soldiers Injure Many Palestinians, Abduct One, Near Jericho 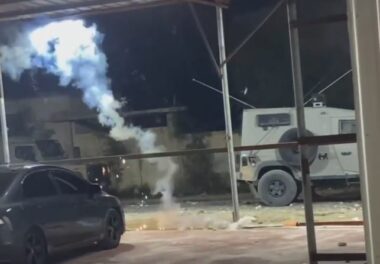 Israeli soldiers invaded, on Monday at dawn, Aqabat Jaber refugee camp, south of Jericho Palestinian city in the West Bank, and shot two Palestinians with live fire, one with a rubber-coated steel bullet, and caused many to suffer the effects of teargas inhalation, in addition to abducting a young man.

Media sources in Jericho said dozens of soldiers invaded the refugee camp after closing its main entrance and searched homes.

They added that many Palestinians protested the invasion, and hurled stones at the soldiers who fired live rounds, rubber-coated steel bullets, and gas bombs.

Two Palestinians were shot with live rounds, and one was with a rubber-coated steel bullet, before they were moved to a local hospital.

Many Palestinians suffered the effects of teargas inhalation, before receiving treatment by local medics.

The soldiers also abducted a young man, identified as Hasan Shaker Balo, before moving him to an unknown destination.