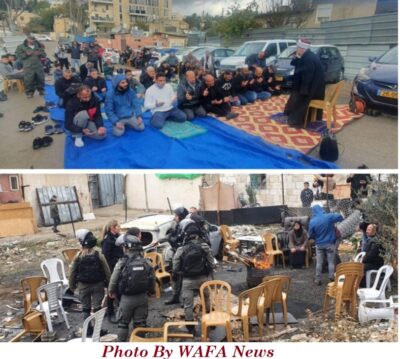 Israeli soldiers injured, Friday, several Palestinians and abducted two, during a nonviolent procession against the Israeli attempts to confiscate a Palestinian home, in Sheikh Jarrah, in occupied Jerusalem.

The WAFA news agency said several army and police vehicles invaded the neighborhood before attacking many Palestinians who nonviolently gathered in solidarity with the local Salem family, threatened with displacement.

The soldiers assaulted the Palestinians, including a journalist, identified as Mahmoud Oleyyan, who was wounded in the eye and face; several Palestinians suffered cuts and bruises.

Furthermore, the soldiers abducted Mohammad Hasan Kiswani, 17, and Mohammad Gheith, 23, before moving them to an interrogation facility.

The violations took place after several nonviolent activists organized a nonviolent solidarity protest on social media, including Friday prayers in front of the Salem family house.

It is worth mentioning that, on Thursday, dozens of illegal Israeli colonizers invaded a land owned by the family and fenced it in a move aiming at confiscating it.