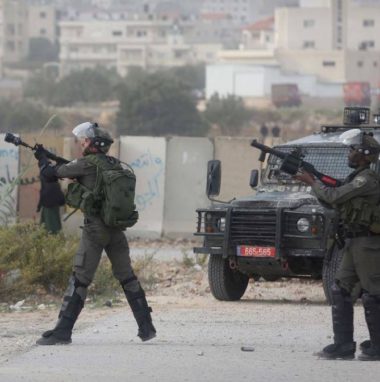 Many Palestinians suffered, late on Tuesday at night, from the severe effects of teargas inhalation after Israeli troops fired tear gas canisters towards a peaceful Palestinian protest in the center of Hebron city, in the southern part of the occupied West Bank.

Local media sources and eyewitnesses reported that the protest was held in solidarity with two Palestinian prisoners, held by Israel, identified as Hatem Al-Qawasmi and Omar Kharrout.

Both detainees have been held in solitary confinement for the past 100 days, and are facing dire conditions.

The protest started in the az-Zawiya area in Hebron, and the residents marched towards Mahmoud Abbas Square in the city.

The nonviolent protesters chanted slogans, condemning the solitary confinement, imposed on both prisoners, and calling for their immediate release before the soldiers attacked them with gas bombs and concussion grenades.