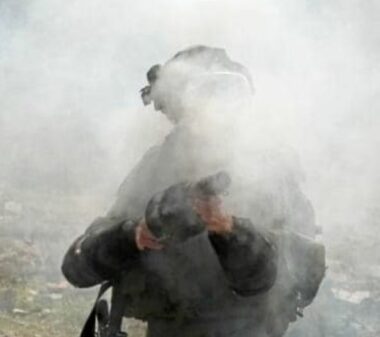 Israeli soldiers invaded, Saturday, Beit Ummar town, north of the southern West Bank city of Hebron, and fired many gas bombs at Palestinian farmers on their lands, in addition to forcing a family out of their orchard, in Abu ar-Reesh area.

Mohammad Awad, a local nonviolent activist against the Annexation Wall and Colonies, said the soldiers forced the family of Mohammad Abul-Hamid Sleibi out of their lands in Abu ar-Reesh area, which is adjacent to Beit Ayin illegal colony, built on illegally confiscated Palestinian lands, near Gush Etzion illegal colonialist block, military base, and security center.

Awad added that the soldiers fired many gas bombs at the family, and many other Palestinian farmers who were trying to pick their olive trees, causing scores to suffer the effects of teargas inhalation.

The soldiers also forced the Palestinians out of their lands and orchards after threatening to shoot or abduct them if they do not leave.

It is worth mentioning that the area is subject to constant assaults and violations carried out by the fanatic Israeli colonists.

Although Sleibi family managed to obtain a ruling from the Israeli High Court allowing them to fence their lands, the illegal colonists are still able to invade the land and attack the residents.