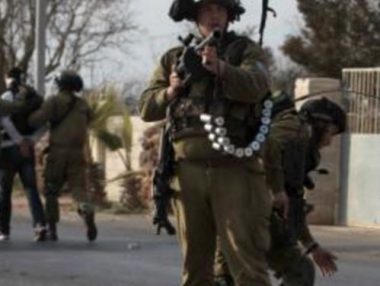 Palestinian medical sources have reported that Israeli soldiers shot and injured, on Monday at dawn, three Palestinians in the Balata refugee camp, and Sebastia town, in the northern West Bank district of Nablus.

The sources said one Palestinian, identified as Mohammad Riyadh Saheli, was shot with a live round, and suffered a moderate injury, in Balata refugee camp, in Nablus.

Several army vehicles invaded the camp, and opened fire on Palestinian youths, who hurled stones and empty bottles on the advancing military vehicles.

The army also invaded Sebastia town, north of Nablus, searched many homes and clashed with local youths, who hurled stones on the military jeeps.

The soldiers fired live rounds, and injured two Palestinians, identified as Abdul-Ghani Bahlaq and Nimir Hatem Abu Ghazala, before local medics moved them to a hospital in Nablus.

On Monday at dawn, the army invaded Shu’fat refugee camp, northeast of occupied East Jerusalem, killed one Palestinian and seriously wounded another.

Also at dawn, the soldiers invaded Shoufa village, southeast of Tulkarem, in the northern part of the West Bank, and completely isolated it.

Late on Sunday night, the soldiers invaded the Mothallath ash-Shuhada village, south of the northern West Bank city of Jenin, kidnapped two Palestinians, and occupied an under-construction home in a nearby town, before using it as a military post.