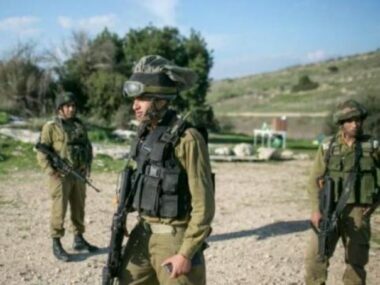 Local sources said many army jeeps invaded the village, after the soldiers surrounded and isolated it.

They added that personnel of the so-called Civil Administration Office of the illegal Israeli occupation photographed many homes and barns, a move that usually precedes issuing demolition orders.

It is worth mentioning that the soldiers demolished the Bedouin community five times in February of this year, 2021.

In related news, the soldiers invaded Khirbat Um al-Kheir village, south of the southern West Bank city of Hebron, and detained a farmer, identified as Kheirallah al-Hathalin, for more than an hour in the al-‘Ein al-Baida area.

The Palestinian farmer was released after the soldiers summoned him to interrogation in Keryat Arba’ illegal colony in Hebron city, after claiming that he “entered a forbidden zone.”