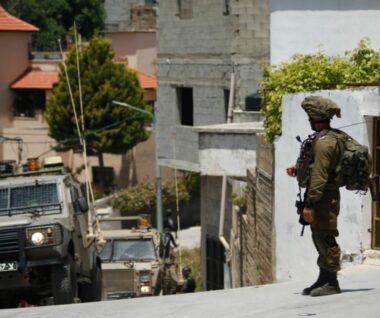 Israeli soldiers abducted, on Monday evening, a young Palestinian man near Jenin, in the northern part of the occupied West Bank.

The Jenin office of the Palestinian Prisoners’ Society (PPS) said the soldiers invaded Nazlet Zeid village, near Ya’bad town, south of Jenin, and abducted Wajdi Fadel al-Kilani, after storming his home and ransacking it, causing damage.

It added that the soldiers invaded the village from several directions, after surrounding it.

In related news, the soldiers invaded the al-Jeeb village, northwest of occupied East Jerusalem, and searched the house of a political prisoner.

Many Palestinian youngsters protested the invasion and hurled stones at the army jeeps, while the soldiers fired gas bombs and concussion grenades.

It is worth mentioning that the soldiers abducted, on Monday evening, a young Palestinian woman, identified as Anagheem Bader Hussein Awad, 21, at a military roadblock near her town, Beit Ummar, north of the southern West Bank city of Hebron.

On Monday at dawn, the soldiers abducted fourteen Palestinians, including a father and his teenage son, in several parts of the West Bank, and attacked fishing boats in the Gaza Strip.

On Sunday, a group of illegal Israeli colonialist settlers uprooted more than one hundred olive saplings in Qusra town, south of the northern West Bank city of Nablus.