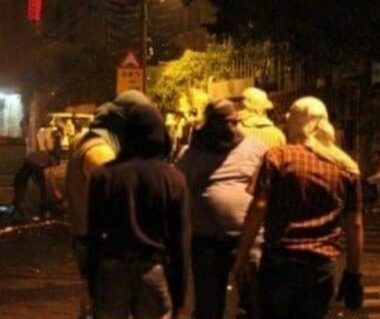 Israeli soldiers invaded, late on Friday at night, Tulkarem city, in northern West Bank, and attacked dozens of Palestinian protesters who were marching in condemnation of the escalating Israeli violations in Jerusalem, especially in and around the Al-Aqsa Mosque.

Eyewitnesses said several army jeeps invaded an area near a local factory, in the western part of the city, and attacked Palestinians who were nonviolently marching.

They added that the soldiers fired many rubber-coated steel bullets, gas bombs, and concussion grenades.

The nonviolent protest was organized by the Fateh movement of President Mahmoud Abbas, in addition to several other political factions and civil-society institutions.

Israeli colonists chanting “Death to Arabs” marched through the streets of Jerusalem Thursday night, attacking Palestinians, including worshipers who were on their way to pray at the al-Aqsa Mosque for Ramadan prayers.

The settlers were part of a right-wing Israeli group called Lehava, which organized the attack march with the stated aim of “restoring Jewish dignity” by “breaking the faces of Arabs”. [NOTE: read more about Lehava and other extremist groups here.]

Counter-protesters, including left-wing Jewish Israelis and Palestinians, gathered at Zion Square to try to block the attack march from entering the Palestinian neighborhoods in East Jerusalem. Another group tried to stand up to the right-wing attackers at Nablus Gate, one of the entrances to the Old City of Jerusalem. [NOTE: for background on the situation in East Jerusalem, go here.]

On Friday night, the soldiers shot a Palestinian medic near the Qalandia Terminal, north of occupied Jerusalem, and caused dozens of residents to suffer the effects of tear gas inhalation in al-Biereh city, north of the central West Bank city of Ramallah.