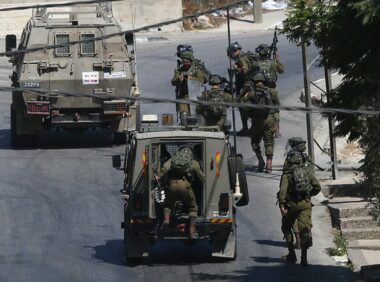 On Tuesday night, Israeli soldiers shot a young Palestinian man and abducted a child in Nabi Saleh village, northwest of the central West Bank city of Ramallah, and Beit Sira, west of the city.

Media sources said the soldiers, stationed at the entrance of Nabi Saleh, shot a young man with a live round in the leg.

They added that Palestinian medics rushed the wounded young man to a hospital in Ramallah, where his wounds have been described as moderate-but-stable.

On Wednesday dawn, the soldiers abducted seven Palestinians from the Hebron governorate in the southern part of the occupied West Bank.

Also, the soldiers abducted eight Palestinians after the army invaded, ransacked many homes, and exchanged fire with Palestinian fighters in Nablus and Beita town, south of the city, in the northern part of the West Bank.