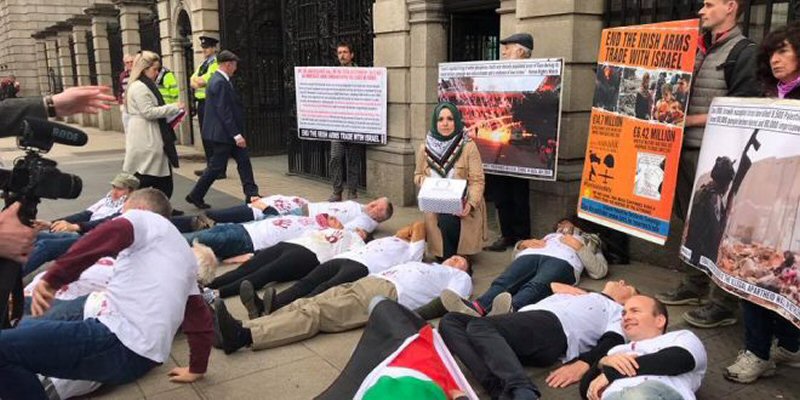 On Wednesday, 4th October, 2017, the Ireland-Palestine Solidarity Campaign presented the Irish Government with over 23,000 signatures to a petition demanding an end to bilateral arms trade between Israel and Ireland.

PNN reports that human rights campaigners were joined by TDs and Senators from the Oireachtas [Irish parliament], and Dublin City Councillors, outside the parliament gates where a ‘die in’ was staged. The activists then marched to the Office of the Taoiseach [Irish Prime Minister] and IPSC Chairperson Fatin Al Tamimi and Vie-Chair John Dorman delivered the two boxes of petitions.

Speaking prior to delivering IPSC Chairperson, Ms. Fatin Al Tamimi, a Palestinian-Irish citizen, said: “The Ireland-Palestine Solidarity Campaign (IPSC) has collected over 23,000 signatures to a petition calling for an end to the bilateral arms trade between Ireland and Israel – a trade worth some €22m over the past decade or so.

“This Wednesday 4th October we will hand the petition in to the Irish government to make them aware that this profiteering from the oppression and murder of Palestinians and colonisation of their land is unacceptable to the people of Ireland.”

Ms. Tamimi concluded: “Our aim is highlight the Irish state’s shameful complicity in the oppression of Palestinians that arises from this trade in death. Ultimately we wish for Irish an arms embargo on this colonial apartheid state that kills, oppresses, tortures, and steals land and liberty from my people on a daily basis.

“Concrete actions are needed at the governmental level to ensure that Israel’s system of apartheid, occupation and colonisation ends once and for all so that we Palestinians can enjoy freedom, justice, equality and a true peace.”