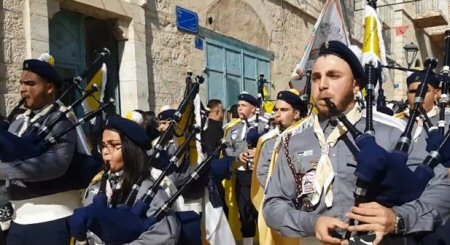 Christmas Eve celebrations, among Palestinians of the occupied West Bank, began on Monday, by scout marches at the Nativity Church in the Manger Square of Bethlehem City, southern occupied West Bank, welcoming the Latin Patriarch of Palestine, Jordan, and the Holy Land Archbishop Pierbattista Pizzaballa, who is also the Apostolic Administrator of the Latin Patriarchate in Jerusalem.

Bethlehem’s mayor, Anton Salman, said that “the message of Palestinians, on Christmas, is that we are staying in the Holy Land, and will maintain it, and resist the occupation until our national goals are achieved, specifically independence and establishing a Palestinian state with Jerusalem as its capital.”

Meanwhile, the Palestinian Minister of Tourism Rula Maayeh, said that some 3 million tourists arrived into Palestine in 2018.