Thousands of Palestinians and Israelis Chant: ‘No to the nation-state law, yes to equality’ 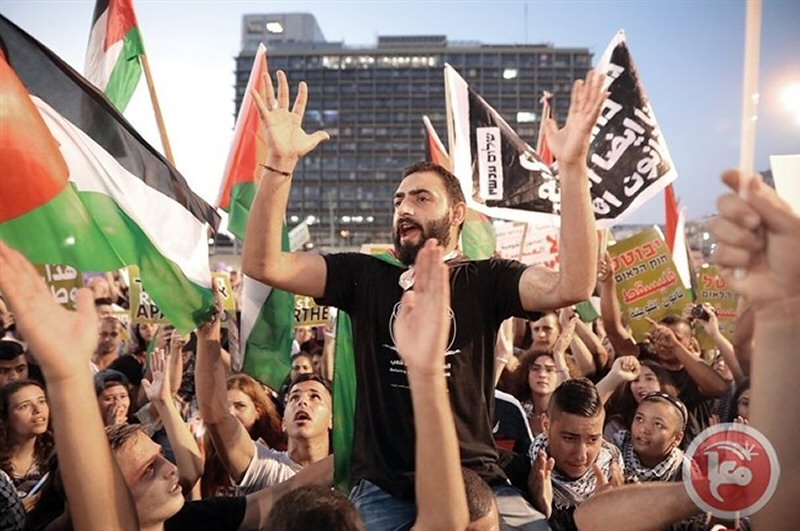 Palestinian flags were seen held high during a demonstration in which tens of thousands of Arab Palestinians and Israeli Jews marched on Saturday, in Tel Aviv, to protest against the controversial Jewish Nation-State Law.

About 30,000 protesters gathered in Rabin Square, in Tel Aviv, and marched towards the Tel Aviv Museum of Art, where the main rally took place. Throughout the demonstration, Arabs and Jews came together to protest the Nationality Law and demanded for it to be annulled under the slogan “No to the nation-state law, yes to equality.”

Despite the protest organizers’ decision to ban the waving of flags, several protesters were seen waving Israeli and Palestinian flags throughout the event, according to Ma’an News Agency.

In response to the raised Palestinian flags, Israeli Prime Minister Benjamin Netanyahu posted, on his Twitter account, a video from the demonstration of a few protesters waving the Palestinian flag and chanting “With spirit, with blood we shall redeem you, Palestine,” and wrote, “There is no better evidence of the Nationality Law’s necessity.”

The message of the protest organizers regarding the demonstration stated, “Our statement is clear: All citizens, all of them, are equal.”

Among those who spoke at the event were former MK Muhammad Barakeh, Chairman of the High Follow-up Committee for Arab Affairs, Mazen Ganaim, Mayor of Sakhnin and Chairman of the National Council of Arab Community Leaders, Prof. Eva Illouz and many others.

Former MK Muhammad Barakeh, expressed his support for those waving the Palestinian flag and said “It is the flag that the Nationality Law tries to erase from history, but it is the flag of a proud nation.”

Barakeh stressed that “All the Jews and all the Arabs are rushing to the square in their thousands in order to repeal this abomination of a law and remove the stain left by the Netanyahu government. Israel and Zionism have two options to choose from — genocide or apartheid. We are here together — Arabs and Jews — to say that we will not allow it.”

Barakeh strongly concluded “Prime Minister Netanyahu, we will not go away, you will.”

The Mayor of Taybeh, Shuaa Mansour Masaru, spoke during the event, labeling the Nationality Law as “very dangerous” and said “We gathered here to protest against this racist law which states that there are two types of human beings in this country.”

Masaru warned that due to the law, Israeli government institutions might stop the use of Arabic language completely.

Masaru explained “It is possible that there will be a decision to prevent the use of Arabic language in all public institution altogether. Another thing that might happen following the law is that on Independence Day minority members will be prevented from raising any other flag other than the Israeli one. This law is racist and not in line with international law.”

Former MK Issam Makhoul emphasized the importance of the demonstration “This is one of the most important demonstrations, that demands an alternative to the current way of thinking in Israel, the one that is dangerous to both nations, which tries to delegitimize the Arab sector. We are part of this country’s landscape.”

Rozin stressed: “We will not comply with this ‘divide and rule’ policy of the Netanyahu government. Anyone who believes that the government that discriminates today against one community will not discriminate against another community tomorrow, is mistaken. One cannot oppose the Nationality Law and advocate equality for all.”