Thousands of Palestinians March In Ramallah 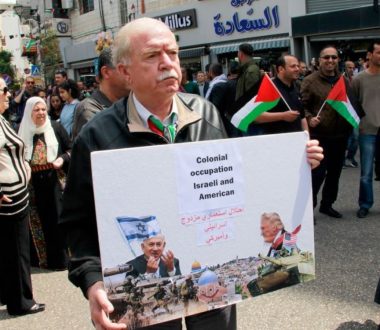 Thousand of Palestinians marched, Monday, from Martyr Yasser Arafat Square in the central West Bank city of Ramallah, and headed towards Qalandia terminal, north of Jerusalem.

The protesters marched while carrying Palestinian flags, and signs affirming their legitimate, internationally guaranteed rights of Freedom, independence and the Right of Return to all refugees.

The also chanted against the illegal U.S. policies supporting and financing this illegal occupation, and the transfer of the U.S. Embassy to the occupied city, in direct violation of International Law.

Ramallah Governor Laila Ghannam, said the Palestinians will continue their struggle for liberation and independence, until the establishment of their state with Jerusalem as its capital.

The coordinator of the National Factions in Ramallah, Essam Abu Bakr, said “the United States strengthens, supports and implements the policies of this illegal occupation of occupied Jerusalem, but the Palestinians will remain steadfast in will never abandon their legitimate rights.”

In related news, the soldiers injured, on Monday at night, many Palestinians in the al-Fawwar refugee camp, south of Hebron, in the southern part of the occupied West Bank.

The Palestinians are marking the 70th anniversary of Nakba Day when Israel was created in the historic land of Palestine in 1948.

It is worth mentioning that the soldiers have killed, Monday, 58 Palestinians, including six children and four officers of the Palestinian Ministry of Interior and National Security, in the Gaza Strip, and injured 2771.

During the Nakba of 1948, prior to the establishment of Israel is the historic land of Palestine, 1.4 million Palestinians lived in 1,300 towns and villages all over historical Palestine. More than 800,000 of the population were driven out of their homeland to the West Bank and Gaza Strip, neighboring Arab countries, and other countries of the world.