Torture: As Described by the Interrogators 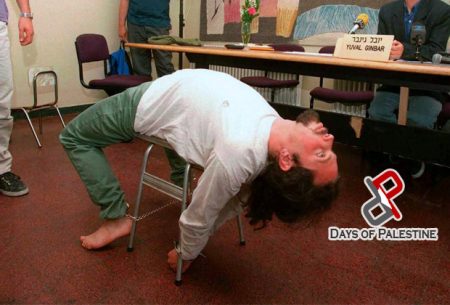 By Chaim Levinson for Haaretz, via Days of Palestine.

For years, the Israeli establishment has tried to conceal what happens in interrogation rooms. When interrogators use torture – or “special means,” to use the establishment’s term – the concealment efforts are redoubled.

Even when testimony of torture reaches the public, the system does everything it can to leave the interrogators’ role in darkness, including signing lenient plea bargains with suspects who were tortured to ensure that the conspiracy of silence remains unbroken.

People who have undergone interrogation have described various methods, from interrogators screaming in their ear, to blows, to being forced into painful positions for long periods. To date, however, all these descriptions have come from the complainants.

But recently, a conversation among interrogators in the presence of several witnesses provided a chance to hear from the interrogators themselves about the kinds of torture used in major cases, who approved it and what information it produced.

N., a former senior interrogator who was authorised to approve “special means,” insisted that it is not like Guantanamo; he and his colleagues do not make suspects stand naked in 10-below-zero weather, he added. He said the methods used are carefully chosen to be effective enough to break the suspect’s spirit, but without causing permanent damage or leaving any marks.

One prisoner in Israeli jails said he was put on a chair, blindfolded and given “a slap that made my head fly off.” Later, he said, a senior interrogator forced him into a “half-reclining” position, with his back hanging off the edge of the chair and the investigator pinning his legs in place.

“At some point, I could not hold it anymore,” he said. “My stomach muscles hurt. I went down the rest of the way, like a bow, and everything started to hurt.” While he was lying there, the interrogator also punched him – “I think in the thigh.”

“This went on for hours,” he added. “They bent my back backward, then raised it a bit to change the position. At some point, I started to cry. I screamed and wept from pain.”

His complaint matches the methods described by the interrogator, N. Slaps were the first method that N. listed. He said the force used is moderate, but the goal is to hurt sensitive organs like the nose, ears, brow and lips. The suspect is blindfolded as a safety measure, N. said, so he will not see he is about to be slapped and move his head in a way that results in vital organs being injured.

N. also described the back-bending technique: The suspect is seated on a backless stool, his arms and legs cuffed, and the interrogator forces him to lean back at a certain angle. This requires the suspect to use his stomach muscles to keep from falling.

Another method, N. said, is forcing the handcuffed suspect to kneel with his back to the wall for long periods of time. If the suspect falls, the interrogators put him back in position, and they keep him there even if the suspect cries, begs or screams.

Torture on the rise

In 1999, the High Court of Justice outlawed torture, which had been permitted until then. But subsequent regulations issued by then-Attorney General Elyakim Rubinstein said interrogators who nevertheless used torture wouldn’t stand trial if they could demonstrate that it was “immediately necessary to save his own or another person’s life, freedom, person or property from a concrete danger of serious harm,” and that “there was no other way to do so.”

The regulations stipulated, however, that only very senior officials could permit the use of these methods, and that any interrogator who used them must keep a detailed record of the number of blows, the painful positions and all other so-called special means used. In addition, the attorney general must be informed after every use of such methods.

Another interrogator who participated in the conversation with N. explained his understanding of these regulations: If an interrogator thinks using such methods can prevent a life-threatening terror attack, he’ll use them to obtain the needed information.

An investigative report by Haaretz in May 2015 found that use of torture was on the rise. The report found that people were being forced to stand for hours with their arms outstretched, kicked for refusing to sit down, tickled with a feather while handcuffed and unable to move, slapped, screamed at in the ear and blindfolded for long periods.

The conversation revealed that all the interrogators were well aware of the pain these methods cause the suspects. Some had even tried out the uncomfortable positions for themselves to determine how hard it was to maintain them.

A separate question is whether torture is effective – and in most cases, the answer has been no. A good example is the case of Mohammed Khatib, one of dozens of Hamas operatives arrested in the West Bank in summer 2014, about two months after three Israeli settlers were killed. Khatib and his fellows were tortured to obtain information proving their connection to the dead Israeli settlers.

Under this torture, Khatib confessed to serving as a lookout for a claimed cell that killed the three Israelis, but it later turned out that not only did he have nothing to do with the incident, neither did the Hamas network to which he belonged.

Another person tortured during that investigation was Shukri Hawaja, whose story Haaretz reported in October 2015. During his trial at Ofer Military Court, Hawaja said he was questioned by “three to 10 interrogators, including a major and a colonel.” The interrogators cuffed his arms and legs, sat him on a backless stool and forced him to bend backward down to the floor. One interrogator “slapped my face and chest, while the one behind me grabbed my shoulders and raised and lowered me.”

N. did not discuss this case. But he did say it was important to make it clear to the suspects that an interrogation is not just questions and answers, and that in their effort to obtain information, interrogators are not limited to verbal methods of persuasion only.

Also from Days of Palestine: 05/17/15 Farming is Dangerous Work in Gaza (VIDEO)