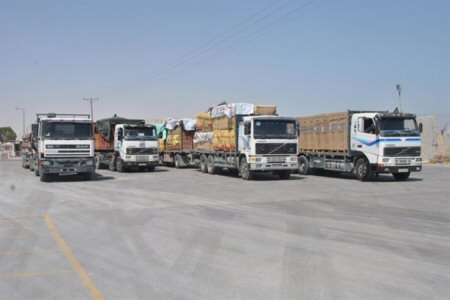 Traders organized a protest wuth the trucks that are supposed to bring goods into Gaza, along Saladin street, calling for rectifying  the collapsed economic conditions in Gaza.

Director of public relations and media at the Gaza Chamber of Commerce and Industry, Maher Tabbaa, said that the decision of suspending the entry of goods via Kerem Shalom crossing is a protest against the collapsed economic situation in Gaza, stressing that no trucks will be entered  to Gaza.

He said  that this is the first protest step, and a message to all countries, noting that it will be followed with other steps.

Cargo deliveries to Gaza through the Kerem Shalom crossing have dropped significantly recently to 350 truckloads per day, up from 800 in previous months.

With the  deduction of Palestinian Authority  employees’ salaries for the tenth month, Gaza employees have not received salaries, now, for  the six month, according to Al Ray. This, along with the severesanctions taken by  president Mahmoud Abbas against Gaza,  all led to collapse the economic in  Gaza.

It is noteworthy that the economic and humanitarian conditions collapsed  so quickly, despite the National Reconciliation Government assuming responsibility for the sector since last October and repeatedly announcing plans to save the people of Gaza.

Emergency fuel for critical facilities in Gaza will become exhausted within the next 10 days, the United Nations warned on Tuesday, noting an urgent need for donor support to avoid a humanitarian catastrophe driven by the energy crisis.

Supported by donors, the UN coordinates the delivery of emergency fuel to run back-up generators and vehicles in order to ensure that a minimum level of life-saving health, water and sanitation services are maintained in the midst of the dire electricity shortage facing the blockaded Strip.

At present, according to a WAFA report, the nearly two million Palestinian residents of Gaza, over half of whom are children, receive electricity for no more than eight hours each day.

In 2018, $6.5 million is required to provide 7.7 million liters of emergency fuel, said the United Nations Office for the Coordination of Humanitarian Affairs (OCHA) in a statement. This is the bare minimum needed to stave off a collapse of services; for the full functioning of critical facilities, the need is 1.4 million liters per month, or about $10 million per year.

“Immediate donor support is urgent to ensure that vulnerable Palestinians in Gaza can access life-saving health, water and sanitation services,” said acting Humanitarian Coordinator for the occupied Palestinian territories, Roberto Valent. “Hospitals have already begun to close. Without funding, more service providers will be forced to suspend operations over the coming weeks, and the situation will deteriorate dramatically, with potential impacts on the entire population. We cannot allow this to happen.”