Trump visits Israel: No to Israeli leaders at the Western Wall in Palestine 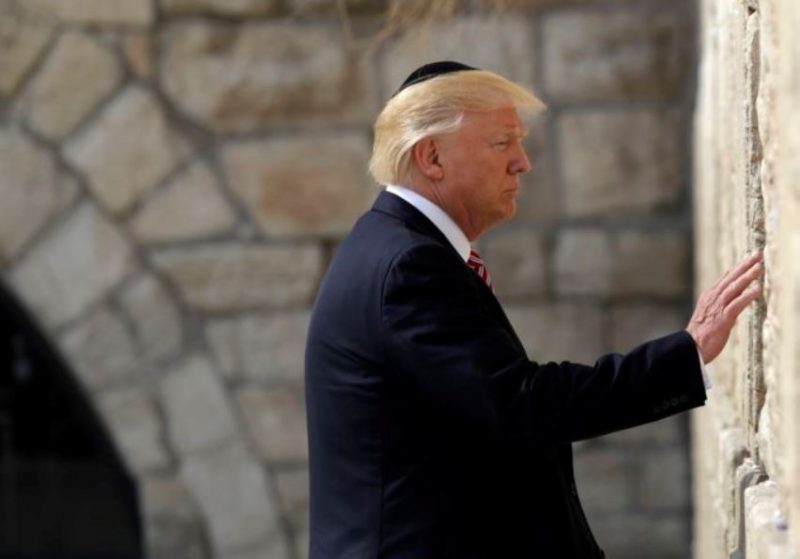 U.S. President Donald Trump earlier described an Israeli – Palestinian peace as “the ultimate deal” and optimistically suggested that it may not be so difficult to achieve as most would expect. It is unclear what foundation Trump may have for his apparent expectations, but his “team” appears to be as one-sided as many suggest Trump’s idea of a “perfect deal”.

What may be surprising and make Trumps visit appear less lopsided – some would say surprising, is that he went to the wall alone, without Israeli leaders. In planning for Trump’s visit to Israel, the U.S. delegation rejected a request that Israeli Prime Minister Benjamin Netanyahu accompany him to the Western Wall, telling the Israelis it is “not your territory. It’s part of the West Bank,” part of lands that Israel annexed in the Six-Day War in 1967.

Trump was also the first U.S. president to openly question the feasibility of the implementation of the Oslo Accords and by extension possibly of a two-state solution. But a one-state solution set aside, the future of Jerusalem within the context of a two-state solution is one of the major unresolved issues. Israel considers Jerusalem as its capital, although the international community does not recognize it as such and foreign embassies are located in Tel Aviv.

The Palestinians, if an independent Palestinian state is created, want to claim east Jerusalem as their capital. Trump, during his run for the White House, said he would move the U.S. embassy to Jerusalem, but has since backed off that pledge. Trump also visited the Church of the Holy Sepulchre, the site where Christian tradition holds that Jesus was crucified and buried in a tomb.

The “real tough cookies” will have to be baked on day two of his visit after day one was largely ceremonial, including the obligatory ceremonial statements about the special American – Israeli relationship and the evilness of Iran.