Two and a Half Years On, the Gaza War Claims Another Child Victim 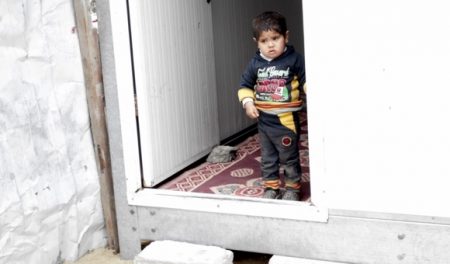 Hani Swairki, 2, stands at the entrance to the trailer where his infant brother, Mohammad, died from cold exposure. (Photo: Swairki family)

Ramallah, January 24, 2016—A newborn died in freezing conditions, in Gaza on January 8, as he slept in a trailer temporarily sheltering his family, after their home was destroyed during Israel’s 2014 offensive.

According to the coroner, the boy, Mohammad Swairki, died after his blood circulation and breathing stopped, due to the cold. Mohammad was born just 13 days before, on December 26, 2016. His mother, Dalal, told Defense for Children International – Palestine that, on the evening of January 7, Mohammad refused to breastfeed. Dalal decided to wait until morning to take him to hospital and tried to keep him warm inside the poorly insulated trailer.

“I kept waking him up that night, to breastfeed him, but he kept refusing,” she said. “It was freezing that night. Then, he did not wake up and stopped moving at around 6:00 in the morning. It is all because of the cold, and because of living in the trailer.”

Unable to rouse the infant, Dalal’s husband took Mohammad to the hospital. “He returned shortly after that and told me that Mohammad had died because he did not eat because of the cold,” Dalal said.

Dalal and her husband had lived at a house in Juhr al-Deek, in central Gaza, until they were forced to evacuate, after Israel launched Operation Protective Edge, a fifty-day military offensive on Gaza between July 8 and August 26, 2014. Dalal gave birth to her first child, Hani, during the final days of the operation.

When they returned to Juhr al-Deek, they found their home had been destroyed. The Ministry of Labour provided the family with a small metal trailer, measuring around 11.5 by 20 feet.

“Then winter came, and the trailer became a refrigerator,” said Dalal. “It became very cold, and water leaked from the ceiling, so we had to cover the rooftop with plastic sheet to stop water from coming in, but that did not stop the cold.”

Operation Protective Edge left at least 2,200 Palestinians dead, including at least 1,492 civilians, according to OCHA. DCIP independently verified the deaths of 547 children killed during the offensive, 535 of them as a direct result of Israeli attacks. Almost 68 percent of the children killed by Israeli forces were 12 years old or younger.

Two and a half years on, the devastation caused by the offensive continues to impact the lives of approximately 2 million Palestinians living in the tiny 141-square-mile coastal enclave. The blockade has slowed reconstruction to damaged infrastructure and prolonged the plight of an estimated half a million Gazans displaced at the peak of the bombing campaign, which destroyed 20,000 homes. More than 1,000 children suffered injuries, rendering them permanently disabled, according to OCHA.

“This tragedy reminds us of the humanitarian crisis that Gazans are enduring, following Israel’s 2014 offensive,” said Ayed Abu Eqtaish, Accountability Program director at DCIP. “Despite the continued suffering of Gazans and overwhelming evidence of war crimes by Israeli forces during the offensive, justice and accountability remain elusive.”