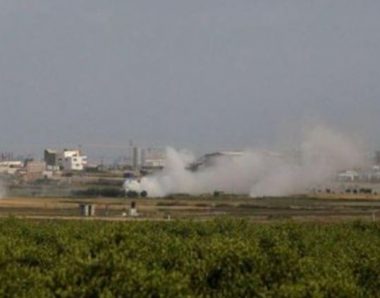 Palestinian medical sources have reported that two young men were injured, on Friday, after an Israeli drone fired a missile at them, in the northern part of the Gaza Strip.

The sources stated that the wounded young men were rushed to a Beit Hanoun hospital.

The Israeli army claimed that the missile was fired after Palestinians launched flaming balloons into lands across the border fence.

The army said the incident comes after what it called a period of calm along the border with the Gaza Strip.

Israeli Ynet News said the army has recently recorded a “significant drop” in the launching of burning kites and balloons from Gaza, adding that the latest incident comes after what it called a “prolonged period of relative calm,” in the area amidst indirect talks held between Hamas and Tel Aviv in an effort to reach a long-term ceasefire.

On Friday morning, a young man, identified as Amjad Fayez Hamdouna, 19, from Jabalia refugee camp in northern Gaza, died from serious wounds he suffered when Israeli soldiers shot him on July 14th, 2018, during the Great Return March procession.