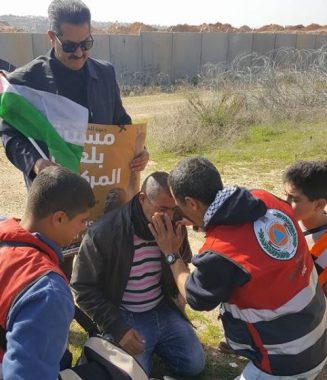 Israeli soldiers attacked, Friday, the weekly nonviolent protest, held by Palestinian, Israeli and international peace activists, in Bil’in village, west of the central West Bank city of Ramallah, leading to clashes that resulted in wounding two Palestinians, including a child.

The marchers carried Palestinian flags, and chanted for national unity, steadfastness, and ongoing resistance until liberation, independence and the release of all political prisoners.

Some local protesters started banging on the iron gate of the Annexation Wall with stones, in addition to walking alongside it, before clashes erupted with the soldiers.

Israeli soldiers, stationed near the gate of the Annexation Wall, fired rubber-coated steel bullets and gas bombs on the protestors.

The Committee said that local activist Ashraf Abu Rahma, and a child, identified as Mohammad Eyad Burnat, were mildly injured.

Dr. Rateb Abu Rahma, the media coordinator of the Popular Committee in Bil’in, called on all factions, and the Palestinian people, to participate in the central procession next Friday, February 17, 2017, in commemoration of those who were killed due to excessive force by the soldiers against the nonviolent protesters.

Talking to Ashraf Abu Rahma, Dr. Rateb called for increasing the popular resistance against the Israeli occupation of Palestine, the illegal Wall and colonies, until the liberation of Palestine.

Mohammad, a local activist, told Ashraf that the popular protests continue for the twelfth consecutive year, against the Wall that was ruled illegal in an advisory ruling by the International Criminal Court.

“Israel continues its violations, the construction of the Wall and colonies, and now is encouraged by U.S. President Donald Trump, and continues to violate International Law,” he said, “We want to inform Israel that this wall, and the colonies, will fall exactly how the Berlin wall fell.”

Another activist stressed on the importance of continuing the resistance against this illegal occupation, especially after Israel passed a law retroactively legalizing colonies, built on Palestinian lands.