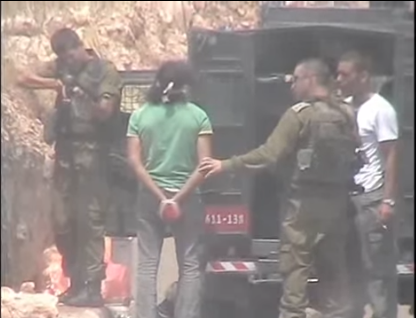 Just after the conviction of an Israeli soldier for involuntary manslaughter for shooting a Palestinian who was lying on the ground mortally wounded in 2016, the Israeli military ordered the promotion of an officer who testified against the soldier. Separately, on the same day, a soldier who shot a handcuffed Palestinian in the leg in 2008 was also promoted.

While Israeli media sources tended to focus on the story about Colonel David Shbeirah, who gave testimony against his underling, very little was reported about the other promotion made on the same day, of a Colonel who ordered the shooting of a handcuffed Palestinian.

Shbeirah was present near the scene where Lior Azaria shot and killed Abdul-Fatah al-Sharif, 21, in Hebron in March 2016.

A cellphone video captured the shooting, in which a combat medic, later identified as Elor Azaria, raises and aims his rifle, and a shot is heard. The Palestinian’s head jolts, and he suddenly has what seems to be a fresh head wound.

Although the Israeli military initially claimed the 21-year old victim had an ‘explosive belt’, they withdrew that obviously false claim – and their claim that the young man lunged toward soldiers with a knife was also called into question by video footage showing a soldier kicking a knife toward the body of al-Sharif.

In the testimony given by his commanding officer in Azaria’s trial, Colonel David Shbeirah stated that Azaria had been depressed prior to the incident, and had been impacted by the stress of his job.

But some critics have pointed out that the blaming of the individual soldier who fired the shots could be an attempt to avoid having any charges filed against higher officers in the battalion, like Shbeirah himself.

The Israeli human rights organization B’Tselem has pointed out that the case of Sgt. Azaria is extremely unusual, in that most Israeli soldiers who shoot unarmed Palestinians go unpunished. But what is far more grave, the organization continued, is that the open-fire policy has the full backing of senior civil and military officials. Israeli law enforcement authorities, both military and civilian, prefer not to deal with these cases, instead, shutting their eyes to this reality, thereby granting it legitimacy and enabling it to carry on.

The case of Colonel Amry Bourberj is a case-in-point of the B’Tselem report. Since shooting and wounding Ashraf Abu Rahma, a non-violent protest organizer, in the leg in 2008 in an incident caught on video, Bourberj has faced no punishment and has instead received accolades and promotions.

Most recently, he was promoted in the Tactical Leadership Academy on the same day that Colonel Shbeirah received his promotion.