Via the Palestinian Campaign for the Academic and Cultural Boycott of Israel (PACBI):

Palestinians thank the UK artists for their principled stand and urge all participating artists to withdraw from the festival until it ends all forms of collaboration with Israel’s regime of oppression.

We deeply appreciate the decision of UK artists Shopping, Richard Dawson and Gwenno to withdraw from the Pop-Kultur festival in Berlin over its continued collaboration with the Israeli embassy in defiance of appeals to end this complicity.

In their eloquent statements, the artists make it clear that accepting sponsorship from the Israeli embassy, while Israel kills unarmed Palestinian protesters in Gaza and commits grave violations of Palestinian human rights, is profoundly problematic.

Shopping, Richard Dawson and Gwenno remind us of international artists who refused to normalize apartheid South Africa in the 1980s.

As conscientious artists, they’ve refused to be part of art-washing Israel’s crimes and have stood in solidarity with the Palestinian struggle for freedom, justice and equality.

We renew our call to all participating artists and cultural workers to withdraw from Pop-Kultur until the festival ends all forms of collaboration with Israel’s regime of oppression.

The Palestinian Campaign for Academic and Cultural Boycott of Israel (PACBI)

We will no longer be performing at Pop-Kultur festival in Berlin this August. After we were recently announced for the festival, we were contacted privately by Palestinian artists and human rights activists about the festival’s cooperation with the state of Israel, and how this serves to normalise and whitewash Israel’s military occupation and decades of oppression against the Palestinian people. We cannot in good conscience be part of that.

As a band, Shopping are and will always be completely opposed to any form of oppression and discrimination, including homophobia, transphobia, colonialism and racism. We stand firmly against antisemitism and Islamophobia. For these reasons, and in harmony with the principles of the nonviolent, Boycott, Divestment and Sanctions movement for Palestinian rights, we affirm our solidarity with the Palestinian call for BDS.

In response to the Palestinian campaign For the Academic & Cultural Boycott of Israel´s call for artists to boycott the upcoming Pop-Kultur festival in Berlin, and following correspondence with both them and the festival, I regret to inform we’ve decided to cancel our performance. The killings on Monday of protesters in Gaza by Israeli government forces is the latest in a long string of atrocities acted upon the Palestinian people. Even if performing at Pop Kultur meant I was endorsing such a government in only the very slightest of ways, I cannot in good conscience lend my music or my name to this. 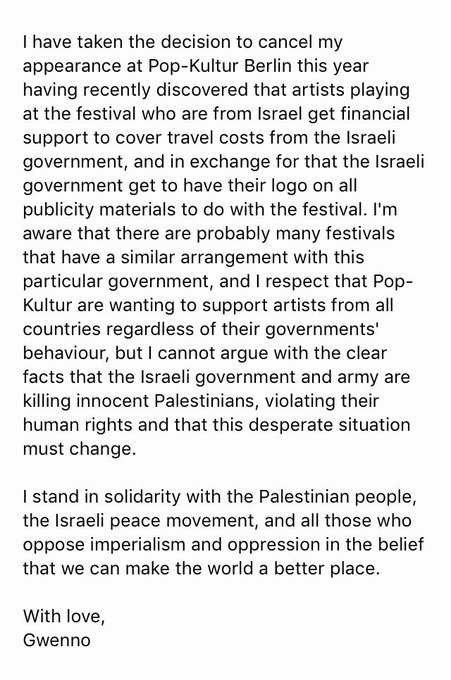