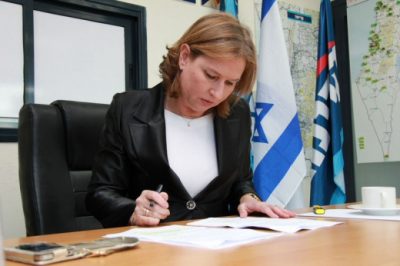 For the fourth time in seven years, the British government has intervened to protect Tzipi Livni, Israel’s former foreign minister, from a possible a war crimes investigation into her role in Israel’s attack on the Gaza Strip in December 2008.

Last week, ahead of her planned trip to London for a conference organized by the Tel Aviv newspaper Haaretz, Scotland Yard’s War Crimes Unit telephoned Livni to invite her to come in for a voluntary police interview.

After receiving the summons, Israel initiated “diplomatic contact” with Britain, according to Haaretz, and the UK’s Foreign Secretary arranged for Livni to receive, once again, the status of a “special diplomatic assignment.”

The police summons was prompted by the police and Crown Prosecution Service’s review of a war crimes complaint that was originally filed in 2009, Daniel Machover, an attorney representing litigants in the case, told The Electronic Intifada. But the UK government has repeatedly intervened to prevent the case from advancing.

Machover lamented “the apparent ease” with which the British government seeks “to interfere with due process by classifying otherwise private visits of suspects from ‘friendly countries’ as ‘special missions’ with a view to providing such suspects with immunity.”

The complaint was lodged by Palestinian victims of Israel’s three-week attack. They are represented by the London-based law firm Hickman and Rose, for which Machover works, and the Gaza-based Palestinian Center for Human Rights.

Continue reading at The Electronic Intifada.