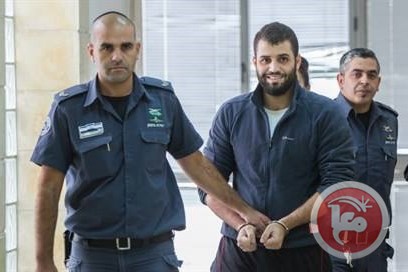 An Israeli court in Jerusalem sentenced a Palestinian man to multiple life sentences, with an additional 60 years, on Monday, after he was convicted for the murder of three Israelis.

Lawyer Muhammad Mahmoud, who works with the prisoners’ rights group Addameer, told Ma’an News Agency that a Jerusalem district court found Bilal Abu Ghanem, from the Jabal al-Mukabbir neighborhood of annexed East Jerusalem, guilty of killing three Israelis in a shooting and stabbing attack on an Israeli bus in October.

The attack took place in the East Talpiot settlement near Jabal al-Mukabbir, and resulted in the death of three Israelis and injury of several others.

Ghanem carried out the stabbing and shooting attack with Bahaa Elayyan, also a Jabal al-Mukabbir resident, who was shot dead by Israeli forces during the attack.

Elayyan’s body has been withheld by Israel since then, as his father has led an ongoing protest movement calling for the release of Palestinian bodies being held by Israeli authorities.

Following the attack, Israel also issued and expedited a demolition order on Elayyan’s home under the pretext that the house was built without a permit from Israeli authorities.

The move came despite past recommendations by an Israeli military committee that the practice of punitive home demolitions did not deter future attacks.

Rights groups have repeatedly criticized Israel’s “collective punishment” in the wake of the unrest taking place across Israel and the occupied West Bank since October.

The UN agency for refugees called for Israel to address “the root causes of the conflict, among them the Israeli occupation,” rather than implementing punitive measures, such as home demolitions, road closures, permit freezes, and the sealing off of entire villages and cities, all of which have been characteristic of Israeli policies in recent months.

See: 06/25/16 UNRWA Statement on Punitive Israeli Demolitions, Use of Explosives