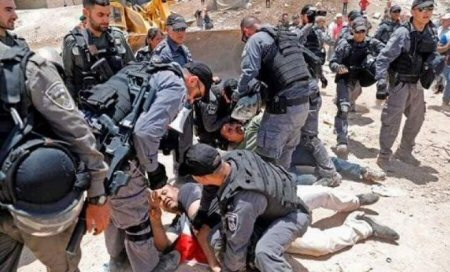 Under the 1998 Rome Statute, the proposed demolition of Khan al-Ahmar, by Israeli occupying forces, could amount to war crimes if the demolition proceeds.

Khan al-Ahmar has been under intense pressure, by Israeli forces, to abandon its land, after Israel’s government expressed the desire to connect the Ma’aleh Adumim settlement to Jerusalem, annexing an area inside the Palestinian West Bank known as the E1 area.

Michael Lynk said, in a statement, on Tuesday, that forcing the transfer of a protected community would be a grave breach of the Fourth Geneva Convention.

Israeli Courts approved the demolition of Khan al-Ahmar in May, but, after weeks of intense protest, the same courts halted the plan until Aug. 1.

However, PNN reports, this has not stopped other areas from being demolished, as residents of the Bedouin village on the Mount of Olives could not stop the demolition of a kindergarten and women’s center, by Israeli forces.

The Bedouin village on the Mount of Olives is also part of the E1 area between Ma’ale Adumim and East Jerusalem.

The relevant crimes, under the 1998 Rome Statute, include: (a) (iv) Extensive destruction and appropriation of property, not justified by military necessity and carried out unlawfully and wantonly; (vii) Unlawful deportation or transfer or unlawful confinement; (b) (viii) The transfer, directly or indirectly, by the Occupying Power of parts of its own civilian population into the territory it occupies, or the deportation or transfer of all or parts of the population of the occupied territory within or outside this territory.

Lynk is calling on the international community to condemn the acts of the Israeli military in annexing large areas of the occupied Palestinian West Bank. But, he also says that mere condemnation will not be enough.

“To be effective, the international community must be prepared to hold Israeli decision-makers legally and diplomatically accountable for their unlawful actions,” Lynk said. “They must demand that Israel halts all measures that could result in forcible transfer, enlist diplomatic and political support to end the systemic human rights abuses to which Palestinians in the occupied territory are subjected, and ensure the occupation is ended.”