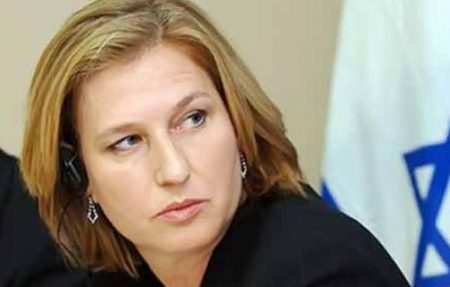 Media sources report, according to Al Ray Palestinian Media Agency, that the United Nations has advanced a suggestion to assume former Foreign Minister of Israel, Tzipi Livni, the post of the Assistant Secretary of State for International Organization Affairs.

The reports point out that, if that happens, it will be the first international position to be handled to an official who is accused of committing war crimes.

In turn, Livni did not confirm to receive a formal notification. However, others look to a deal which would enable the former Prime Minister of Palestine, Salam Fayyad, to be placed in the role of International Envoy.

Tzipi Livni reportedly hails from a right-wing extremist family. She worked on secret missions for the Mossad, and progressed in her positions from recruiting soldiers and collecting information to taking part in the operations of assassinating Palestinians and Arab officials in Europe.

Tzipi Livni was about to be arrested in some European countries. On December 2009, a British court issued a judgement decision to imprison her when she was on a visit to London due to allegations of war crimes.

Also, Livni canceled her visit to Brussels, recently, in the wake of the Attorney General declaring his intentions to detain her for investigations of committing war crimes in Gaza.

Moreover, International human rights organizations, after the release of the Goldstone report, pursued several Israeli officials including Tzipi Livni for committing wars against humanity in Gaza.

Former UN Affairs spokesman Abdul Hamid Siam said that placing Tzipi Livni in the position of Assistant Secretary of State for International Organization Affairs is not an auspicious start for the new Secretary-General, António Guterres.

Bashir Mraish, son of Palestinian Ambassador Mammon, who was assassinated by the Mossad in Athens, said that Tzipi Livni ‘s nomination for such position carried a problematic moral to the UN.

Toby Cadman, an international criminal law specialist, said that accusing Tzipi Livni of such indictments puts the UN in an embarrassing situation.

In the same context, Israeli Prime Minister Benjamin Netanyahu said that there are possibilities for Israel to agree on Salam Fayyad as UN Envoy in return for putting Tzipi Livni in the position of the Assistant Secretary of State for International Organization Affairs.