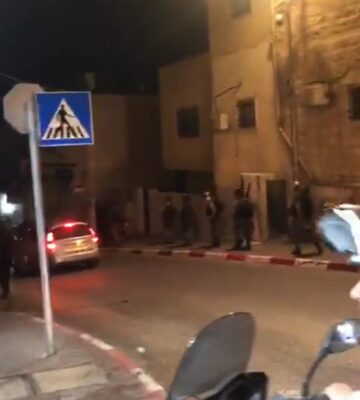 Eyewitnesses said dozens of soldiers invaded the town, and started walking near stores and homes, while stopping and interrogating many residents, leading to protests.

Many youngsters hurled stones at the invading soldiers who fired rubber-coated steel bullets and concussion grenades.

They added that undercover soldiers then infiltrated into the town, and repeatedly assaulted a young man, who remained unidentified at the time of this report, before kidnapping him.

On Monday at dawn, the soldiers abducted eighteen Palestinians from their homes in several parts of the occupied West Bank, after the army invaded and ransacked dozens of homes, and interrogated many Palestinians while inspecting their ID cards.

On Sunday evening, the soldiers abducted four Palestinians, including a husband and his wife, from the Old City of occupied East Jerusalem, in the West Bank.