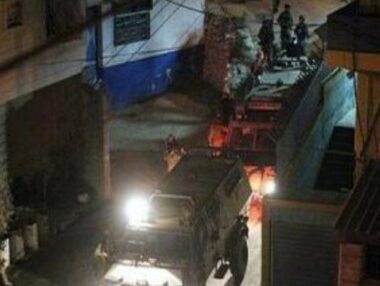 Undercover Israeli soldiers infiltrated, on Monday, into a residential building in the Aseera Street, in the northern area of the northern West Bank city of Nablus, and kidnapped one Palestinian, in addition to wounding dozens, including three with live fire, during ensuing protests.

Local sources said the undercover soldiers were driving a civilian car before invading a residential building, and kidnapped Abdul-Hakim Shahin, from his home.

After kidnapping the young man, dozens of soldiers invaded the area, leading to protest, before the army fired many live rounds, rubber-coated steel bullets, gas bombs, and concussion grenades.

Ahmad Jibril, the head of the Emergency Department of the Nablus branch of the Palestinian Red Crescent Society (PRCS) said the soldiers shot three young Palestinian men with live ammunition, before the medics rushed them to Radia hospital, in Nablus, for treatment.

Jibril added that more than 20 Palestinians suffered the effects of tear gas inhalation, and a few others sustained cuts and bruises.