US Backtracks on Move to Close DC Palestinian Office 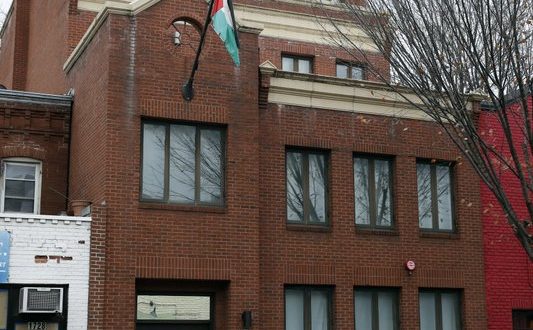 Assuring what the Palestine News Network (PNN) published last night, the Trump administration has backtracked on its decision to order the Palestinian office in Washington to close, instead saying it would merely impose limitations on the office that it expected would be lifted after 90 days.

Last week, U.S. officials said the Palestine Liberation Organization mission couldn’t stay open because the Palestinians had violated a provision in U.S. law requiring the office to close, if the Palestinians should try to coax the International Criminal Court (ICC) to prosecute Israelis.

The move triggered a major rift in U.S.-Palestinian relations that threatened to scuttle President Donald Trump’s effort to broker Mideast peace before it ever got off the ground.

State Department spokesman Edgar Vasquez said that the U.S. had “advised the PLO Office to limit its activities to those related to achieving a lasting, comprehensive peace between the Israelis and Palestinians.”

Vasquez said even those restrictions will be lifted after 90 days if the U.S. determines the Israelis and Palestinians are engaged in serious peace talks. The White House, in an effort led by Trump adviser and son-in-law Jared Kushner, has allegedly been preparing a comprehensive peace plan to present to both sides, in the coming months.

“We therefore are optimistic that at the end of this 90-day period, the political process may be sufficiently advanced that the president will be in a position to allow the PLO office to resume full operations,” Vasquez said.

The reversal marked a serious departure from the administration’s interpretation of the law, only a week earlier.

Officials had said that, one way or another, the office had to close because Palestinian President Mahmoud Abbas, in a U.N. speech in September, had called on the ICC to investigate and prosecute Israelis.

The same law, hoever, says that the president can let the office re-open after 90 days despite an ICC push, if serious Israeli-Palestinian talks are underway.

There were no indications that the Trump administration had initially moved to close the office as part of a premeditated strategy to strengthen its hand in eventual peace talks. Instead, officials explained the move by saying Secretary of State Rex Tillerson, in a strict interpretation of the law, determined that Abbas’ speech had crossed the legal line.

Still, the move led the Palestinians to issue an angry response, last weekend, threatening to suspend all communication with the U.S. Additionally, senior Palestinian negotiator Saeb Erekat accused the U.S. of bowing to pressure from Israeli Prime Minister Benjamin Netanyahu’s government “at a time when we are trying to cooperate to achieve the ultimate deal.”