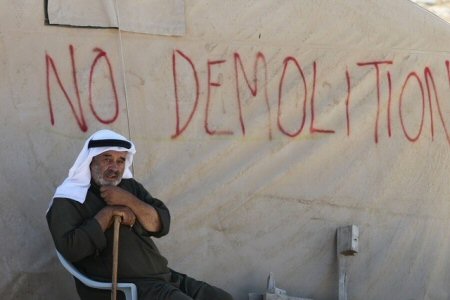 The Palestinian village of Susiya, located in the South Hebron Hills area of the southern occupied West Bank, is under renewed threat of expulsion by the Israeli state, according to a statement from international activists working in the area.

The activists released a statement on Saturday, saying that on Wednesday, November 22, the Israeli State Attorney’s Office announced that within 15 days, it would demolish some 20 buildings in the village, representing approximately one-fifth of the total number of buildings in Susiya.

Israel claimed that the buildings were constructed in violation of a judicial order, though the Palestinians in Susiya deny such claims, according to Ma’an.

“In accordance with international law, Israel has no right to change the local legislation, including local practices relating to property and settlement, unless there is a clear security need to do so,” the statement said.

Susiya is considered “illegal” by the Israeli state and has been embroiled in legal battles with the Israeli state for years. The village is located in Area C — the more than 60 percent of the West Bank under full Israeli military control, where Israel refuses to permit Palestinian construction.

Rights groups have pointed out that this policy lines up with Israel’s goals of expanding Israeli settlements throughout Area C while depopulating Palestinian villages there.

In the case of Susiya, many of the village’s 200 residents have ties to the land that predate the creation of the state of Israel, and Ottoman-era land documents to prove it. However, the village lies between an Israeli settlement and Israel-controlled archaeological site, making them a target for Israeli demolitions.

“The day residents are expelled from their land will seal their fate as a farming community with a unique tradition. It will also seal the fate of their farmland, as settlers from the adjacent settlement will gradually invade their land without the law enforcement authorities taking any action to prevent them,” the statement said, adding that “this is precisely what has already happened to 400 dunams (100 acres) of land that belonged to neighboring communities.”

Susiya’s attorney, Quamar Mishriqi-Assad, co-director of Haqel: In Defense of Human Rights, said that “the demolition of one-fifth of the village is an extreme step that will damage the most basic humanitarian needs and the very humanity of those involved, without it even having been proved that they have violated the law.”

Assad pointed out that the demolition will leave 100 people, half of them children, without shelter just as winter weather has begun to settle in.

“Israel is guided neither by law nor justice, but by the desire to evacuate the area,” Assad said, adding that “over the years, residents have attempted to regulate their residence of their land, however, all their requests for permits, appeals, and a plan have been rejected – not even a single building has received a permit.”

Photo: A Palestinian man sits outside his tent in the southern West Bank village of Khirbet Susiya. (AFP/Hazem Bader, File)