US Palestinians Start Campaign in Protest against Closure of PLO Office 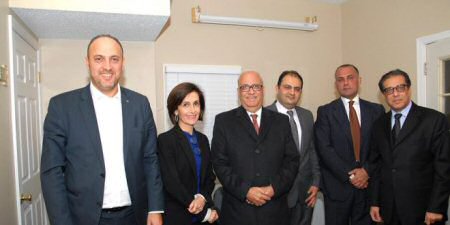 Palestinian communities in the United States are continuing with their campaign against the US State Department’s decision not to renew the license of the Palestinian diplomatic delegation in Washington and to shut down its office. Multiple meetings have been held, and a letter was written to US Secretary of State Rex Tillerson to voice their rejection of the decision, and to urge an extension of the waiver for the PLO delegation. The letter included reasons why this decision is unreasonable if the US really wants to be an honest broker for the peace process in the Middle East.

In the letter they wrote: “We are deeply concerned about the decision to impose restrictions on the Palestine Liberation Organization (PLO) General Delegation in Washington, DC, by refusing to extend the waiver on the statutory restrictions imposed by Congress.

“It was Israeli Prime Minister Benjamin Netanyahu who turned down the Arab Peace Initiative; he rejected President Barack Obama’s call for a solution based on the 1967 borders; and he declared that there will never be a Palestinian state on his watch.

“Mr. Secretary, our country prides itself on championing freedom of speech, accountability, and rule of law as principles that make the world a better place. In accordance with these principles, Palestinian President Mahmoud Abbas has the right to call for the ICC to hold Israel accountable for crimes committed against the Palestinian people in successive military assaults. In light of Israeli rejectionism and a culture of impunity that’s demonstrated by countless human rights reports, it is the right of the Palestinian people to use all international legal means to address their grievances.

“Shutting down the PLO mission would undermine U.S. credibility as an honest peace broker just as President Donald Trump plans to advance “the ultimate deal” to resolve the Israeli-Palestinian conflict; a deal that’s difficult to achieve even under the best of circumstances.

“We urge you to extend the waiver for the PLO delegation, and to pursue a meaningful peace effort by pushing Israel to show good faith by ending its unlawful and unilateral expansion of settlements, thereby making renewed peace talks possible.”

On the other hand, the PNN reports, Arab institutions in the United States said that the decision of the US state Department not to renew the license of the PLO delegation will have great and harmful effects on the peace process.

Arab institutions in the United States also said that the office is the sole representation of the Palestinian people in Washington, and the administration’s decision would have a significant and damaging impact upon any attempts to resume peace negotiations.

They have rejected linking unnamed US State Department officials to Palestinian President Mahmoud Abbas’s request for an investigation into the International Criminal Court (ICC) on “Israeli officials and their involvement in settlement activities and attacks.”

The Arab communities and institutions said they would hold a press conference announcing their position and steps against the US State Department’s decision.

On the other hand, the President of the American Federation of Ramallah held a reception in honor of the recovery of the Secretary General of the PLO Executive Committee, Dr. Saeb Erekat, after his recent lung transplant. Discussions about the US decision dominated the ceremony.

He said that all the speeches and discussions during the reception of Dr. Erekat focused on the importance of diplomatic and media action to clarify the dangers of the US decision against the office of the PLO delegation in Washington.