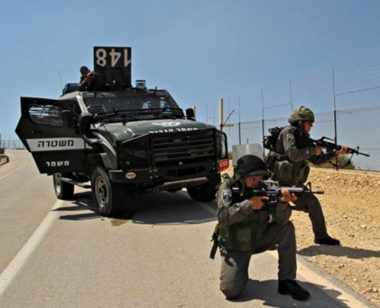 A court in the norther Israeli city of Kfar Saba, to the south of Haifa, sentenced a “volunteer” of the Israeli border force to seven months in prison for killing a Palestinian worker in 2013.

Israeli news website Ynet reported that the “volunteer,” David Arik Bibi Rubi, aged 43, agreed to a plea bargain with the prosecution, which will also include an additional four months of probation, following his release from prison.

Rubi shot and killed 23-year-old Antar Aqra, from the Nablus-area village of Qabalan, for not having an Israeli-issued work permit during “a joint police operation to identify and arrest illegal Palestinian workers,” according to Ynet.

Ynet further reported, according to Ma’an, that, after a group of 41 undocumented Palestinian workers had been detained, “Rubi was assigned to watch over them while forces continued their searches for additional suspects,” adding that Aqra then attempted to escape.

“According to the indictment, Rubi gave chase to Akra and ordered him to stop. Akra then ducked down — an act that, according to the defense, led Rubi to believe that the Palestinian had picked up a rock or another weapon with which to attack him. Rubi drew his weapon and shot Akra in the chest, killing him,” Ynet said.

An Israeli border police spokesperson was not immediately available for comment.

A report released by Human Rights Watch noted that Israel’s widely-condemned shoot-to-kill policy has received widespread support among Israeli citizens, citing a 2016 poll by the Israel Democracy Institute which found that 47 percent of Jewish Israelis supported the sentiment that “any Palestinian who carries out a terror attack against Jews should be killed on the spot, even if he has been captured and clearly does not pose a threat.”