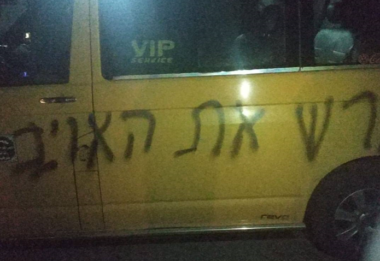 Salfit, Sunday, October 06, 2019 (WAFA) – Extremist Israeli settlers slashed, on Saturday at night, the tires of 13 Palestinian-owned vehicles and spray-painted racist slogans in the village of Qira, to the north of the occupied West Bank city of Salfit, according to local sources.

Aisha Nimr, head of the Qira village council, told WAFA that the settlers sneaked their way into the village at night, slashed the tires of parked vehicles and spray-painted racists graffiti and slogans on vehicles and houses.

Israeli settler violence against Palestinians and their property is commonplace in the West Bank and is rarely prosecuted by Israeli authorities.

It includes arsons of property and mosques, stone-throwing, uprooting of crops and olive trees, attacks on vulnerable homes, among others.

Over 600,000 Israelis live in Jewish-only settlements across occupied East Jerusalem and the West Bank in violation of international law.