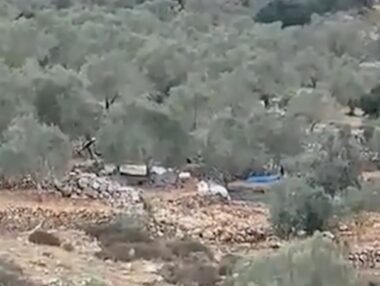 NABLUS, Tuesday, October 5, 2021 (WAFA) – Israeli settlers today evening stole the olive crops of a Palestinian resident in the town of Kafr Qallil, south of Nablus, according to a local activist.

Ghassan Daghlas, who monitors settlement activities in the area, told WAFA a number of Israeli settlers from a nearby illegal settlement stole the olive harvest belonging to local resident Omar al-Qanni.

Palestinians look forward to the annual olive harvest season, which is a major income source for thousands of Palestinian families in the West Bank.

In addition to stealing olive harvest from farmers, many areas planted with olive trees are closed to farmers due to their proximity to Jewish settlements or fall behind the Israeli apartheid wall.

According to the Israeli human rights information center, B’Tselem, the dispossession, and violence that mark Israel’s policy in the West Bank peak during the olive harvest, when Palestinians need to access their land to pick the olives off their trees.

“The overall conduct of the Israeli authorities during the olive harvest season is indicative of the unlawful policy that Israel has implemented in the West Bank for decades. This policy centers on dispossessing Palestinians, including farmers, and preventing any possibility of development – willfully ignoring the needs, rights, and wishes of the Palestinian population while continuously expanding settlements, developing them, and promoting other Israeli interests,” said B’Tselem.