Weekly Nonviolent Protests Held In Ni’lin And Bil’in, Near Ramallah 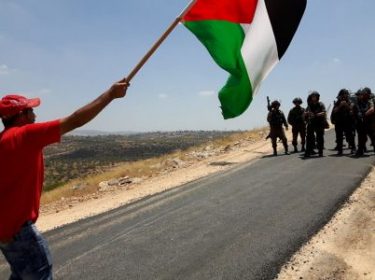 The protesters also commemorated the second anniversary of the death of Mohammad Abu Khdeir, a Palestinian child who was kidnapped by Israeli terrorists, before they tortured him, and burnt him to death.

The soldiers invaded Ni’lin village, and assaulted the weekly nonviolent protest against the Annexation Wall and colonies, with gas bombs and concussion grenades, causing many to suffer the effects of tear gas inhalation, and burning several Dunams of farmlands.

Today’s protests also came in commemoration of the second anniversary of the death of Mohammad Abu Khdeir, the 16-year-old Palestinian child who was kidnapped by Israeli terrorists, who tortured him, and burnt him alive.

A similar protest also took place in Bil’in nearby village, when many Palestinian, Israeli and international peace activists marched from the center of the village towards the isolated Palestinian lands and orchards.

The Popular Committee against the Wall and Colonies in Bilin called on regional and international human rights and legal groups to prosecute Israel for its ongoing crimes, including the murder of Abu Khdeir, the Dawabsha family in Nablus (Father, mother and baby, burnt alive by Israeli terrorist while sleeping in their own home – several related links included) and Mohammad Badran, 14.

Nonviolent protests are held weekly in Ni’lin and nearby Bil’in and Nabi Saleh, in the Ramallah district, in addition to Kufur Qaddoum near Qalqilia, and various other areas in the occupied West Bank, and are largely met with the excessive use of force by the soldiers, leading to dozens of casualties, including fatalities.