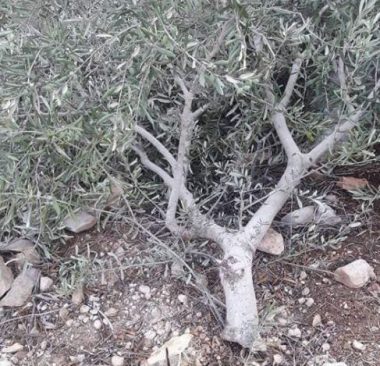 Israeli forces bulldozed around 30 dunams of Palestinian lands, in an area adjacent to the illegal Israeli settlement of Kharsina, to the east of the southern West Bank district of Hebron, as a prelude to the construction of a new settlement outpost, there, said a local activist.

Abd al-Hadi Hantash, an expert in settlements and maps, said Israeli bulldozers razed around 30 dunams of land, then laid base course — a layer of material used for the construction of roads — and removed the electricity poles belonging to the Hebron municipality, cutting off power to several Palestinian residents in the area, as a prelude to build a new settlement outpost there.

Israeli forces paved a road in the said area almost two months ago, in order to connect the new settlement outpost with other nearby settlements located adjacent to Bypass Road 60, built on confiscated Palestinian land.

In related news, extremist Israeli settlers, today, chopped dozens of olive trees, in the village of Burin, to the south of the occupied West Bank city of Nablus, said local WAFA sources.

The sources said that settlers from Yitzhar, an illegal settlement inhabited by hardline extremist Jews, uprooted about 36 olive trees in the area of “Khillet al-Goul”, an area which belongs to the villagers of Burin.

Meanwhile, students were evicted from Burin High School, after the guard of the aforementioned settlement drew his gun on them.

The school’s principal, Ibraheem Omran, said that the school was evicted after the guard made threats and called Israeli soldiers to the scene.

Attacks on education by Israeli military forces and Israeli settlers, in the Palestinian territories, constitute grave violations of children’s rights to education and development. These attacks are particularly prevalent in the most vulnerable areas of the West Bank – Area C, H2 and Jerusalem.

Furthermore, today, the Israeli military halted the construction of a water collection well and detained three Palestinians in Khirbet Samra, in the northern Jordan Valley.

Aref Daraghmeh, a local activist, said that an Israeli military force broke into Khirber Samra, preventing three workers from proceeding with the restoration works of a water collection well, before detaining them.

The Israel military has also designated about 46 percent of the Jordan Valley as a closed military zone since the beginning of the occupation in June of 1967, and has been utilizing the pretext of military drills to forcefully displace Palestinian families living there, as part of a policy of ethnic cleansing and stifling Palestinian development in the area.

Approximately 6,200 Palestinians live in 38 communities in places earmarked for military use, and have had to obtain permission from Israeli authorities to enter and live in their communities.

In violation of international law, the Israeli military not only temporarily displaces the communities on a regular basis, but also confiscates their farmlands, demolishing their homes and infrastructure, from time to time.

Israeli politicians have made it clear, on several occasions, that the highly strategic Jordan Valley area would remain under their control, in any eventuality.