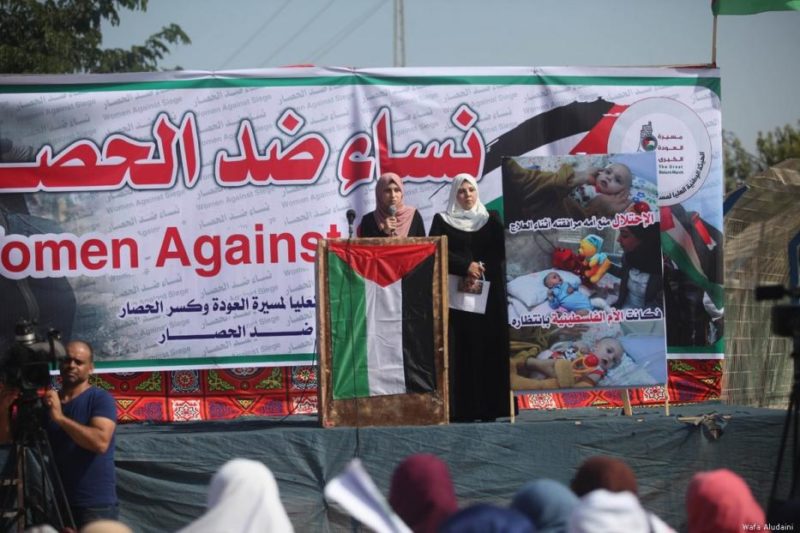 Scores of Palestinian women protested at the Israeli controlled Erez crossing in the besieged Gaza Strip this morning calling for an end to the siege.

Organised by the Higher Committee of the Great Return March and Breaking Gaza Siege, the demonstration highlighted the suffering of women in the Strip as a result of the ongoing¬†12-year long Israeli siege¬†on Gaza.

The construction sector is practically stagnant as a result of the inability to import the necessary equipment. Construction used to offer some 70,000 job opportunities in the enclave.

Representative of the committee, Iktimal Hamad, said: ‚ÄúPalestinian women are the main victims of the siege of Gaza; She is the mother, wife, daughter, teacher, student, doctor and patient. She suffers from all aspects of the illegal blockade.‚ÄĚ

‚ÄúShe is a wife to a murdered husband and a mother to a murdered son. And yet she, herself, is a legitimate target for Israeli soldiers, yet we continue to protest and speak out for our rights.‚ÄĚ

Mother of nine-month-old Mohammad Mohaysin, who Israel banned from accompanying her sick baby on his trip to the occupied West Bank to access treatment, explained her bitterness at being prevented from being by his side. ‚ÄúI am not the only women to be prevented from accompanying my baby, there are scores more. I am lucky though as my toddler has the chance to travel and get treatment, there are thousands of children prevented from traveling and dozens died while waiting for the Israeli permission to travel through this crossing.‚ÄĚ

Mohammad is currently receiving treatment in the occupied West Bank city of Hebron where Palestinian Envar Irfaiyye has been caring for him since 8 October.

‚ÄúHis mother calls me with video talk then we talk. They became very happy when they saw him, all of his relatives became present during the conversation to see him,‚ÄĚ Envar said. Protesters called on the international community and human rights institutions to stand up for Palestinian rights and bring an end to the unjust siege of Gaza.