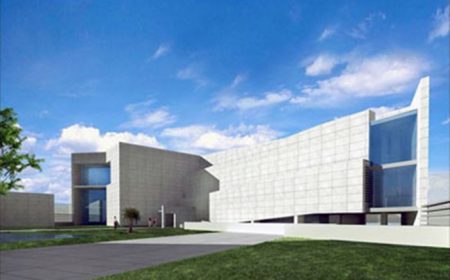 Israel and its western allies may call him “terrorist,” or “irrelevant,” but, for his people and millions around the world, Yasser Arafat was a hero, a freedom fighter, a man of principles and, most certainly, a very relevant person.

Arafat, who dedicated his life to keeping the cause of his people for freedom and independence alive and on top of the world agenda, had single handedly stood up to Israel, a regional superpower, and its powerful western allies, out-maneuvering many attempts to sideline him and persisting on the road toward the full liberation of Palestine, in spite of all odds.

For these reasons and more, the Palestinian people decided to honor Arafat, their iconic late leader, to keep his memory and legacy alive, and remembered by generations to come.

The $7 million Yasser Arafat museum, inaugurated this year, was built with Palestinian money and by Palestinian architects, not far from where Arafat is buried, and at the location where he had spent his last years under Israeli military siege before his abrupt death on November 11, 2004.

The museum traces almost a century of modern Palestinian history, starting with the last years of Ottoman rule. It charts the start of the Palestinian conflict with Zionism, the rise of the Palestinian national movement, and the confrontation with heavily-armed Zionist gangs and British Mandate authorities. It also covers the 1948 Nakba, or catastrophe, which led to the loss of Palestine, the uprooting and displacement of two-thirds of the Palestinian people, and the creation of Israel, up to Arafat’s death in 2004.

The museum’s display area consists of four ascending ramps. A visitor will see a collection of meticulously-arranged photos with captions, excerpts of United Nations resolutions related to Palestine, maps, video and audio material that offer an insight into the Palestinian national struggle against Zionist settler colonialism. The exhibits display key moments of modern Palestinian history, including the 1897 Zionist Congress in Basel, the 1917 Balfour Declaration, the Palestinian revolution of 1936, the massacres of Palestinians, notably the Qibya and Kufr Qassem massacres, forced displacement of Palestinians in 1948, Palestinian liberation struggle, the creation of the PLO, the defeat or Naksa of 1967, the Israeli invasion of Lebanon, the first intifada of 1987, Israeli-Palestinian negotiations and the eruption of the second intifada in 2000.

A range of Arafat’s possessions and archive are on display over the two floors of the 2600 square meter museum. They include the famous sunglasses he wore when addressing the UN in 1974 and the Nobel Peace Prize he won in 1994 for the Oslo accords.

The museum also features videos, photos and excerpts of literary writings by prominent Palestinian writers or poets, such as Mahmoud Darwish and Samih al-Qassim, about key moments in Palestinian history.

As one finishes the fourth and last ascending ramp, the visitor will cross an aerial walkway to reach Arafat’s cramped old office and bedroom, where he withstood 34 months of siege by Israeli military during the second intifada. The innate character of the besieged area has been preserved to provide visitors with an immediate, authentic visualization of the conditions at the time of the siege.

On display, behind a glass screen, is a single bed, a small cupboard with four military uniforms and a pile of the black-and-white Kuffiyah, the head-dress that distinguished Arafat, as well as Arafat’s gun. There is also a picture drawn by his daughter, Zahwa.

Elsewhere, there is a room where Arafat used to receive medication before being transferred to a Paris hospital for treatment, after he fell ill while under Israeli military siege. There are also the Palestinian, Russian, French and Swiss medical reports of the test results on samples taken from his remains, after his corpse was exhumed, to figure out the reasons for his death, which Palestinians insist was an assassination by Israel using radioactive polonium material, after traces of the highly toxic chemical were found in his remains. Images from his funeral procession in France, Egypt and Ramallah adorn screens on the walls.

While the museum’s founders, the Yasser Arafat Foundation, said that many of the late leader’s belongings were  retrieved and put on display at the museum, yet many were lost during Arafat’s life in exile, and even at home in Gaza.

Museum director Mohammad Halayqa confirmed that efforts would continue to be exerted, in order to restore and archive all of Arafat’s possessions.

The museum is a perfect balance of architecture and design. Designed by late prominent Palestinian architect Ja’far Touqan, it was built on an area of 1,350 square meters but the total area of the display rooms reaches 2,600 square meters. It has an electronic information center, a small specialized library, a hall for variable exhibitions and an auditorium.

Commenting on whether the display of Arafat’s pistol is a call for Palestinians to pursue armed struggle, Halayqa said it is ordinary to display the gun, since it formed an integral part of Arafat’s character.

The museum’s vision is to present to the world and Palestinian people and document the contemporary narrative of the Palestinian national movement through the life and work of Yasser Arafat within an educational and cultural setting. The items will help perpetuate Arafat’s heritage and legacy.

“The museum should not be viewed as solely dedicated to Yasser Arafat, but it is dedicated to the Palestinian national memory,” Halayqa said.

Also on display is one of Arafat’s super small size notebooks, in which he wrote down his thoughts on events and developments of the Palestinian question, including meetings with figures. According to Halayqa, it is one of many notebooks that have been recovered, but he noted that there are “certainly” other notebooks which are censored, due to the sensitive information they include.

The museum was opened on November 10, just a day before the Palestinian people commemorated the 12th anniversary of Arafat’s death. Since then, hundreds of people and groups have visited the museum.