26 Violations against Media Freedoms in May 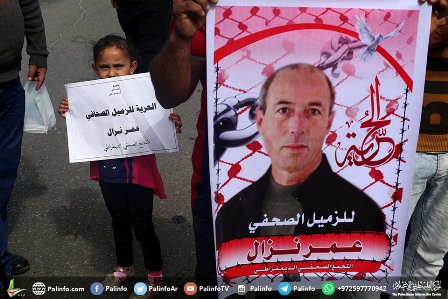 The month of May, 2016, has reportedly witnessed a limited decline in the number of violations against media freedoms in Palestine, compared to the previous month.

Israeli violations ranged from targeting five journalists with rubber-coated metal bullets, tear gas bombs and Stun grenades, to sentencing two journalists, rather than detaining, three other media graduates, and two other cases of banning from coverage, 3 cases of detention and interrogation, one case of banning from travel, one case of confiscating media materials and a case of humiliating security check of a reporter before entering a press conference for the Israeli and the French prime ministers, once he refused this humiliating treatment and impeded the coverage of the conference.

Israeli occupation authorities sentenced member of the secretariat of PJS Omar Nazzal to four months. On the second of May, Nazzal was detained on  23/04/2016, while he was on his way to Jordan to participate on a conference for European Journalists Union in Bosnia.  Moreover, “Salem” Israeli military court sentenced the editor of Al- Fajer TV Sami Al Sa’ee to 9 months. He  was taken into custody on  09/032016,  under the pretext of  ” incitement through what he posts on Facebook .”

On 02/05, the Israeli military confiscated a collection of photographs belonging to MADA, and featuring Israeli attacks and violations against Palestinian journalists and media outlets, whilst Ali Mohammad Sabbah, the director of Al Haya Center for Art and Culture was intending to transport them to Jerusalem, through Qalandia checkpoint, for an exhibition on the occasion of World Press Freedom Day, whence he was detained for long hours, rather than being summoned and interrogated several times.

On 03/05, several journalists were injured, including a reporter for 24A.E, Ali Naser Obeidat, and Mohammad Abu Shusheh, photographer and director of Roya TV Chanel. Moreover, photographer and journalist Zaher Abu Hussein was injured with bruises and partial burns, due an attack by the military against a peaceful demonstration organized by the Palestinian Journalists Syndicate in solidarity with journalist Omar Nazzal.

On 06/05, correspondent for Palestine TV in Qalqilia, Ahmad Abd Al Malek Othman- Shawar, was injured with two rubber bullets that hit his hand and leg while he was covering a demonstration against settlements in Kafr Qaddoum. On the same day, Almuthana Samir Deek, videographer of Trans-media agency, was hit with four rubber bullets in his hand, leg and shoulder by Israeli forces.

On 23/5, Nayef Safadi,  the director and photographer for the European News Agency- EPA in Palestine and Israel, was exposed   to a humiliating security check, by Israeli security  forces, as he was entering at the Israeli Prime Minister’s office in Jerusalem, to cover a press conference.

Different Palestinian apparatuses, in both the occupied West Bank and the Gaza Strip, committed a total of 10 violations against media freedoms (5 in west Bank, 5 in Gaza), ranging between detention and arrest, 5 cases of summoning and interrogating journalists, and two threats and incitement rather than confiscating equipment.

On 02/05, Palestinian intelligence summoned Adib Barakat Attia (26 years), whereupon he was detained and interrogated. He was summoned several times after coming back from studying in Cyprus (Masters in Media).

On 9/5, the chairman of Al –Eqtesadeya (the economic) newspaper in  Gaza, journalist Mohammed Khaled Abu Jyab, was threatened by the chairman of contractors in  the Gaza Strip, after posting comments on Facebook regarding transporting cement into Gaza Strip.

On 16/05, internal security in the Gaza Strip summoned  the correspondent of “Wattan” and a volunteer at the radio, “Sawt AlSha’b”, Ezzedine Abu Aisha, who was interrogated twice, rather than the degrading and inhuman treatment that can amount to torture.

On 16/05, Palestinian intelligence  took into custody the correspondent of “Al Aqsa TV”, Tareq Abdelraziq Abu Zeid, from his home in Nablus (still under arrest).

On 23/05, Palestinian intelligence also summoned the correspondent of “Al Quds” in Bethlehem, Mamdouh Mahmoud Hamamrah, while heading back home after participating in a media conference held in Turkey.

On 24/05, freelance journalist Amjad Ayman Yaghi was exposed to threats and inciting campaign after publishing an investigative report in the Lebanese newspaper “Al Akhbar”, about  sexual harassment against women in Gaza Strip.

Editor’s note: The Palestinian Authority continues to maintain tight security coordination with the Israeli state, despite countless violations of human and civil rights by both parties, since its inception.