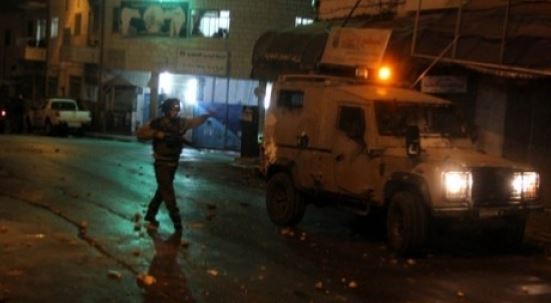 In the latest set of abductions through invasion of Palestinian areas, a nightly occurrence in the West Bank and Jerusalem, Israeli forces took 32 Palestinians from their beds in pre-dawn raids New Year’s morning.

In the Ramallah area, the majority of those abducted were from Kobar village, where 14 Palestinians were taken.

The other 5 were taken from Ramallah and al-Bireh.

The two Palestinians taken from Jenin were identified as Mohammad Jihad Abu Bakr and Usama Amarneh.

Another two unidentified Palestinians were taken from Salfit in the northern West Bank.

These invasions and abductions are a nightly occurrence in the Occupied Palestinian Territories, where the Israeli military retains full control of Palestinian land and forces the Palestinian population there to live under military occupation.

Many of those abducted in these night raids are then held in Israeli prisons for months on end with no charges under so-called ‘administrative detention’.